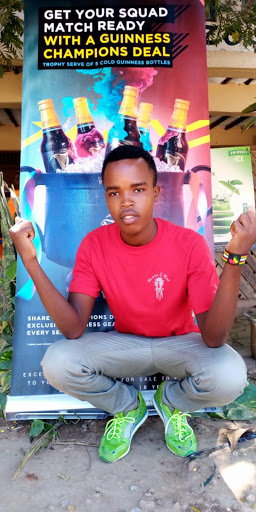 23-year-old Eric Ngethe died after allegedly been beaten to death by police officers on Wednesday night at Nyamira drinking spree in Mandigo area within Diani.

According to his relative Edith Waithera, the deceased was still at work when the police officers arrived.

It said the officers who were enforcing curfew at that time lobbed tear gas canisters before hitting them.

Waithera said the police had tried to get in but Ngethe and his colleagues locked themselves in.

She said they were trying to escape when police managed to get in.

"Due to teargas chemicals my uncle and other people were suffocating and wanted to run away using the roof but they were unsuccessful, " she said.

Waithere said her uncle was whipped until he lost consciousness while others got several body injuries.

She said it is when police rushed him to Tiwi hospital but died on the way.

According to her, Ngethe had died on the spot while being whipped.

He said so far over 200 people from both Mombasa and Kwale are nursing serious injuries after being assaulted by police in the name enforcing the curfew.

He said Ngethe got injured in a stampede while trying to run.

Bitok said the police had taken him to a nearby health dispensary to save his life.

The body was taken to Kwale mortuary for postmortem.

It is barely two days when a 48-year-old man was alleged to have died on the hands of police in Matuga after he was beaten at Likoni in Mombasa on the first day of curfew.

The Star/ BY SHABAN OMAR