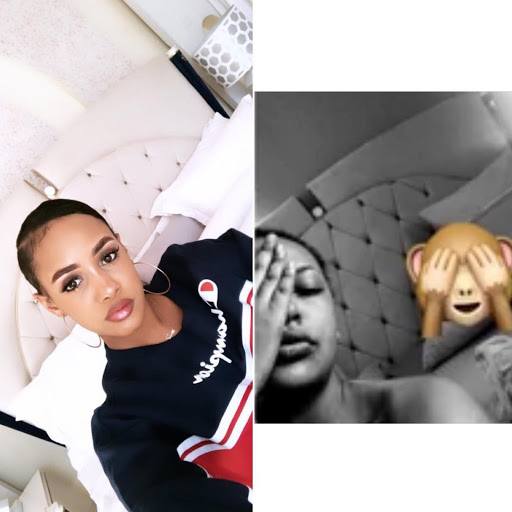 Little has been said about Tanasha Donna's mum's involvement in her daughter's relationship with Diamond Platnumz.

Well, it turns out she actually has been following the relationship closely.

In a past interview with Mpasho, Tanasha revealed that her mum, Diana Oketch is the biggest fan of the bongo star.

However, Tanasha's mum, Diana was not a happy woman reading about Diamond's salacious cheating scandal, months after the daughter was in a relationship with him.

Diamond was hard-pressed to explain how a socialite named Official Lynn took selfies in what looked like his bedroom in his mansion in Dar-Es-Salaam.

Lynn posted a photo of the bed that looks exactly like that of Diamond's bed on her social media.

Lynn shared the picture on Snapchat on a weekday, accompanied by an emoji of a monkey covering eyes.

After too much pressure, Lynn later deleted the photo.

A few days after Tanasha visited Diamond's crib in Dar es Salaam, oblivious of Lynn's visit, she took a similar photo and posted it on her social media.

Blogs went wild, they compared the two beds and the rumours started flying.

The Bongo hearthrob is said to have spent the night with the popular socialite who brands herself as a singer and model.

Diamond denied having any association with Lynn.

He blasted Lynn saying, "Stop making it look like I hang out with you and that you spent the night at my residence. You bought a bed similar to mine at Danube. Respect yourself and stop seeking out publicity stunt using my name."

In another post, Diamond said he hasn’t talked to the socialite since December last year when he was in Nairobi for the Wasafi Festival.

"Since December, I have warned you to stop stalking me. I cannot cheat on my love nor do I want a relationship or affair with you. You deleted your chats out of embarrassment, now you are looking for other ways to cause drama. Have some respect."

In a candid interview, Tanasha addressed the cheating scandal saying:

For me things never get to me until my family is involved. It got to me when my family got involved they called me and asked what is going on.

In a past interview with , Tanasha revealed that she is very close to her mother and grandmother. Those are the two people whose opinion matter to her.

Months later, Tanasha walked out of Diamond's life over claims of infidelity.