From gold to ashes! How Njenga Karume's Sh40 billion empire has fallen 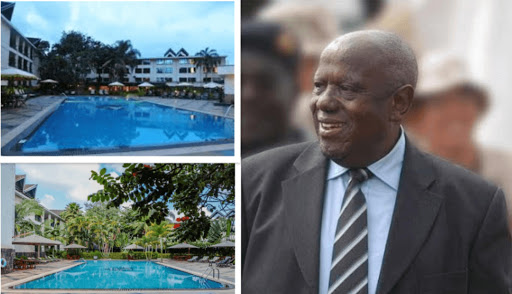 Njenga Karume, the rich and former powerful Cabinet minister, asked his children to triple the size of his estate within five years of his death.

But instead of the Sh40 billion estate growing, it has shrunk significantly amid court fights for its control, seven years after Karume's 2012 death.

Although Regent Auctioneers did not reveal the creditor behind the auction planned this month, sources confirmed that the sale is meant to recover an Sh257.6 million loan owed to Guaranty Trust Bank.

This is the second time in less than six months the lender is raising a hammer on the prime four-star hotel located in Nairobi’s Westlands business district.

In a fresh notice placed yesterday in a local daily, the auctioneer gave a detailed description of the property without revealing the value claimed.

The defaulted loan is far below the estimated valuation of the Jacaranda Hotel that is located in one of the most prime areas of Nairobi.

The latest land rate report by Hass Consult puts an acre piece of land in Westlands at close to Sh200 million. This means the land that accommodates the hotel alone is in the upwards of Sh600 million.

In early 2018, the late minister’s hotel was also in the limelight after Kenya Revenue Authority (KRA) sent auctioneers to recover tax arrears worth Sh197 million.

The standoff was however settled in court after KRA agreed to a repayment plan of Sh50 million monthly instalments and a payoff of Sh7.9 million to auctioneers who had already secured the hotel’s property to recover the tax.

The pending auction is likely to be the final blow to Karume’s empire that cuts across three sectors: hospitality, real estate, and distribution.

The late entrepreneur who built his business empire from charcoal as detailed in his book Beyond Expectations: From Charcoal to Gold had 25 businesses in total.

The book was published in 2009, three years before Karume succumbed to cancer.

He started his first business in elementary school, where he began buying and reselling books, pencils and other stationery from a wholesale shop outside the school.

In his book, he claims to have put the school tuck shop out of business.

Some of Karume’s other known businesses in the hospitality sector include the Lake Elementaita Lodge in Nakuru, Indian Ocean Beach Resort and Diani Beach at the Coast.

In the real estate sector, the empire includes Cianda House Koinange Street, Nairobi, Unity House and many other apartment blocks in Nairobi, Kiambu and Limuru.

He also had a stake in at least 46 companies including the Standard Chartered Bank (K), Gracia Limited, Kiambu Sawmills Limited, New Kenya Cooperative Creameries, Kenya Wine Agencies Limited among others.

The shrewd businessman and politician who served in the former President Mwai Kibaki’s Cabinet as the Minister for Defence in 2006 left his wealth in the hands of trustees.

As is the case in many other family businesses, Karume did not have a clear succession plan.

According to the Global Family Business Survey released in October last year by audit firm Deloitte, family business leaders in Kenya traditionally focus their strategy on a two to five year period and have no 10 or 20-year plans.

Some 24 per cent of the businesses lack any succession plans.

This, according to the study, has seen most businesses collapse after the death of founders.

In Kenya, only 17 per cent of family businesses survive past the third generation.

For Karume, his empire started shaking immediately he died on the morning of February 24, 2012, at the Karen Hospital, leaving behind a Declaration of Trust dated May 3, 2011, incorporating the Njenga Karume Trust.

His wealth has for the past six years become a battlefield between family members and trustees, yielding into multiple court tussles, slowed decision making for businesses, hence losses, loan defaults and tax arrears.

In 2018, the family was forced to sell a 17 per cent stake in the business to raise Sh2.975 billion to pay debts after the business ran out of liquid cash.

Among businesses that were disposed of included the Village Inn Hotel, 25 acres of Land in Elementaita and Kacheliba Tea Estate.

The court had compelled the family and trustees to form a mediation council to help make quick, less costly and confidential decisions to keep the estate afloat.

Despite the formation of the mediation council, hostility between the two camps persisted. The latest furore arose after the death of the late businessman’s granddaughter, Michelle Karume, in September last year.

The family accused trustees who include Kung’u Gatabaki, George Waireri and Margaret Nduta of freezing bank accounts, thus holding billions of shillings to the detriment of dependents.

The Star had not managed to reach trustees for comment by the time of going to press.

If auctioneers make good their intention and put Jacaranda Hotel under the hammer, the late Karume’s book will have to be re-written, this time with an opposite mantra: ‘From Gold to ashes’.