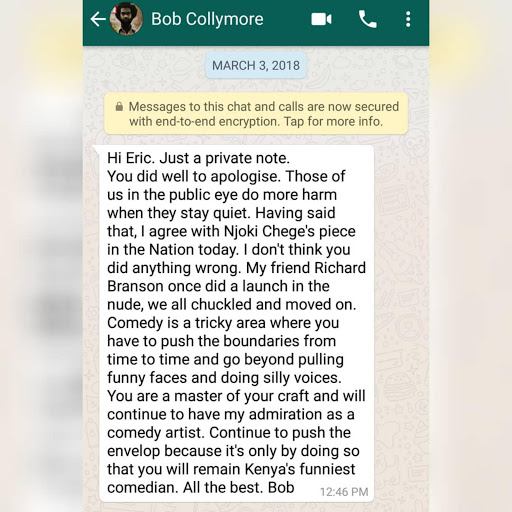 Eric Omondi is one of the celebrities, who got a chance to work with the late Bob Collymore.

The finest Africa's comedian has for the first time revealed that Bob Collymore stood with him after a video of the funny man swimming naked in a river in Turkana with small boys went viral.

Eric was bashed online, with many claiming he was promoting immorality.

He said Bob reached out to him and promised to sponsor his stadium tour project.

So on the 3rd day of March 2018 a video of me Swimming in River Turkwel in Turkana surfaced online and went viral. A few people found it funny, Majority were extremely offended. I apologized for the Video. A few corporates that were in line to Sponsor my inaugural Stadium tour which was in two weeks time were all over sudden not returning my calls. At around 12:46 PM Bob Collymore sent me the text below.

He then called me and asked me to see him in the morning, I did and after a long conversation about so many things he stood up suddenly and Said "Eric I have a meeting, I will Sponsor the Stadium tour forward me the proposal NOW!" This came as a complete surprise since we barely discussed Sponsorship. The Stadium tour is currently on the 19th County Sponsored by @safaricomplc_.

Below is the message Bob Collymore wrote to Eric.

Hi Eric. Just a private nite. You did well to apologize. Those of us in the public eye do more harm when they stay quiet. Having said that, I agree with Njoki Chege's piece in the Nation today. I don't think you did anything wrong. My friend Richard Branson once did a launch in the nude, we all chuckled and moved on, Comedy is tricky. you have to push the boundaries and go beyond pulling funny faces and doing silly voices. You are a master of your craft and will continue to have my admiration as a comedy artist. Continue to push the envelop because it's only by doing so that you will remain Kenya's funniest comedians. All the best. Bob.