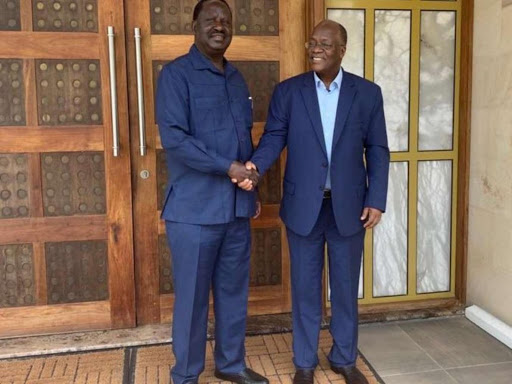 Highlighting the behind the scenes intrigues behind the aborted December 12 and the January 30 swearing in ceremonies in his new book ‘Treason’, Miguna says Magufuli decline the request and even opposed the whole plan.

Miguna explains how "his" National Revolutionary Movement of Kenya (NRM-Ke) committee proposed to swear Raila in at the Kenyan Embassy in Ghana or Tanzania.

The two foreign missions, according to Miguna, were a fallback plan should the government have cracked down on NASA and blocked his swearing-in at a venue in Nairobi.

“The NRMKe team had proposed that if we were unable to conduct the function in a public space such as Uhuru Park in Nairobi, which was the preferred venue then we could do it at a Kenyan Embassy in Ghana or Tanzania. The second option was to hold it either in Kakamega, or Kilifi, or Mombasa,” Miguna reveals in his new book, Treason: The Case Against Tyrants & Renegades.’

The Kenyan-born lawyer with Canadian citizenship says Raila had tasked his trusted ally and Siaya Senator James Orengo to speak to President Magufuli about the possibility of holding the ceremony in Tanzania.

According to the book, ‘ Miguna says president Magufuli who has close personal ties with Raila, flatly opposed the whole swearing in plan.

The self-declared NRM General writes in the newly released book: “According to Orengo, Magufuli believed that leadership was ‘a gift from God’ and that if God had not given Raila that gift, there was no reason to pursue our plans and that Raila should forget about being sworn in as The People’s President,” reads an excerpt from the book launched on Saturday.

Miguna says the statements were interpreted to mean that Magufuli was of the view that God did not want Raila to be the president of Kenya.

“I found such statements to be outrageous. God had not manipulated the August 8, 2017 General Election,” Miguna says in his explosive book.

God had neither established a weak IEBC, threatened and/or bribed its commissioners and secretarial staff, threatened the Kenyan judiciary, he notes.

“God was not guilty of switching off the IEBC kiems kits, infiltrating and posting altered numbers on the IEBC server, nor was he responsible for refusing to give access to the IEBC server as had been ordered by the Supreme Court of Kenya,” the controversial lawyer says.

In his usual provocative style of writing, Miguna exposes the behind the scenes intrigues that marred the events that preceded Raila’s January 30 swearing-in at Uhuru park grounds.

Miguna calls the bluff on Raila saying while the NASA leader had publicly demonstrated commitment to be sworn in on Jamhuri day, he was again engaging reverse gears and slowing down the process.

He recalls the events of December 9 when while watching an Arsenal soccer match at businessman Jimmy Wanjigi’s Muthaiga home, Raila broke news to them that his co-principals had actually asked that the December 12 swearing in be postponed.

He adds that, after the speech was reviewed and approved by both Muthama and Orengo, they were driven to prominent businessman Jimmy Wanjigi’s mansion in Muthaiga where he later learnt that they were supposed to swear in Odinga on that very day.

“Mudavadi and Weta are insisting that we postpone... They are going to address the media at Okoa Kenya just now,” Miguna quotes Raila telling them after a lengthy telephone conversation.

Miguna says Raila had left them in the room with Orengo and former Machakos senator Johnstone Muthama, and escused himself to answer the phone call before returning with the shocking news.

“Muthama tried to support the postponement, but Wanjigi and I did not let him get far. Orengo was blowing hot and cold. Winnie said nothing in front of Raila,” Miguna narrates in his book.

He adds, “ Wanjigi was livid, or so I believed. He reminded Raila of the expectations of millions of his supporters. Then Mudavadi, Wetang’ula and Makueni Governor, Kivutha Kibwana came on TV,” recalls Miguna.

Miguna says that he challenged Raila to explain his innocence lividly because according to him the statement was not a surprise and appeared to have been a well-choreographed script.

“Raila tried to give us excuses, claiming that Mudavadi, Wetang’ula and Kivutha acted alone; that they only informed him minutes before they had addressed the media,” says Miguna.

Miguna says he would have believed Raila if only Mudavadi, Wetang’ula or Kibwana had addressed the press from their private offices or homes — individually.

Instead, he says, the press conference we were watching on TV was jointly being addressed by two of Raila’s co-principles with Kibwana representing Kalonzo who was still in Germany.

“It was held at the OKOA Kenya office in the presence of Raila’s fifth columnists like Ndii, Ong’wen and Ole Kina,” he adds.

Miguna also notes how, during a committee meeting on November 28, 2017, at a top hotel in Westlands, Mombasa Governor Ali Hassan Joho had strongly suggested that the swearing in ceremony be held in Kilifi.

“He (Joho) said that the Mijikenda were warriors, just like the Turkana, Pokot or Samburu, and that if the police or any other state security agents tried to disrupt the event in Kilifi, ‘the Mijikenda would unleash hellfire on them,’” reads yet another excerpt.