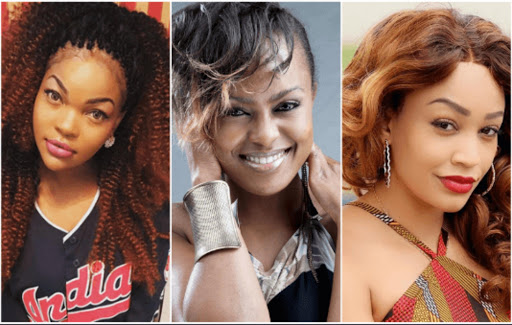 Aki hawa ni thirsty!! Just when you thought that team mafisi was too much to handle, team mafisilets are giving them a run for their money. It seems like there are those celebrities who look back and don't even remember the number of boyfriends they have had in the past. Even though some might be married, signs of 'ufisi' are still clearly visible in their lifestyles.

The ever flamboyant madam boss is one lady you can't fight against when it comes to "manufacturing" babies. Even after running away from her first marriage, Akothee went ahead to find herself a foreign lover who many of her fans referred to as a sponsor.

In this case, we would describe this 'walking wallet' as an old pot-bellied white man with flashy cars and an extravagant lifestyle, but Akothee prefers to call him her Benefactor. The Djele Djele hit maker who now has 5 kids, was last year faced with a tough time after she lost her twin kids from yet another man. Let's just say she is conversant with the statement, "Fill the world."

Huyu anataka maombi! This Tanzanian lass has tasted many of the famous & sexy men in and around Dar Es Salaam. Her never to be forgotten relationship was with bongo star, Diamond Platnumz, who she separated from after a nasty public break up. Just before Diamond, Sepetu had dated the late Kanumba who was a well-known bongo actor. In an interview with a Tanzanian TV show, Sepetu revealed that she did away with her pregnancy which caused their break up.

Since then Sepetu has been through Baadae singer Ommy Dimpoz, Big Brother Africa winner Idris Sultan and the famous model, Calisah with whom a video of the two making love went viral. Sepetu who is now single might be looking for a new conquest, so heads up gents, you just might be next on her list!

I must agree that she looks stunning even though she is a mother of 5. Zari who ran away from her 12-year marriage over what was said to be physical abuse is now the celebrated wife to Diamond Platnumz. Zari had been married to Ivan Ssemwanga bearing  3 cute boys together but it ended in a divorce which saw the two split their wealth. Zari, however, cited that she met Ivan when he was broke and dusty. After the divorce, Zari went ahead to date a basketballer but the relationship did not go far. Months later she came across an American man and was with him briefly. Then finally, came Diamond, apple to her eye, and the couple now has two kids together. What a journey in the quest for love!

Avril made headlines back in July when she finally came out to reveal that she had broken up with her South African fiancé, Leslie Mugadza, after a 3-year engagement. This was after numerous rumors and speculation from the public. Before then, the Yule Dem hitmaker was rumoured to be dating Kenya's soccer legend Oliech. Since she is now single, let's see which male celebrity is next on her list!

This Chokoza girl though! She recently seemed to have settled down with her new flamboyant boyfriend identified as  Kevin Mutisya. She was once head over heels in love with Dodoma maker Colonel Mustafa but their one-time love did not last after Mustafa accused Marya of cheating - claims that the lass denied. When their relationship went public, Marya was accused of dating a married man since Kevin was married to Mike Sonko's cousin. Kevin came out to clear the rumours citing that he was not together with ex-wife. Let's just say that love is a struggle!