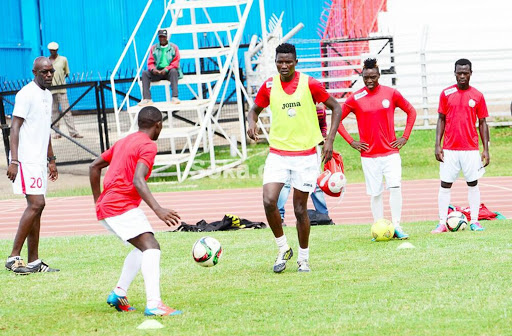 Barely a  week after a local footballer was reported to have clobbered his pregnant wife, another popular Kenyan football star has been accused of sneaking a woman into the Harambee Stars Camp in Nairobi West over the weekend before the highly anticipated match between Kenya and Zambia.

You would expect that the day or at least days before an AFCON qualifier, footballers would be focused on the game ahead. But allegations have emerged that that wasn't the case for some; or at least one player ahead of Harambee Stars qualifier with Zambia last weekend.

Most of the players performed sub par during Sunday's match attributing the poor performance to lack of preparation. But it could have been due to too much "activity" the night before.

According to our sources, one footballer, a starter in Sunday's game, had a night of heavy partying with a lady rumored to have been an intern at the hotel the team was staying at; culminating in what we were told was wild sex.

When word leaked the hotel is said to have gone on overdrive in their PR campaign and relieved the young lady of her duties.

All members of Harambee Stars, both players and officials denied that any such thing had happened. But a source at the hotel confirmed that indeed there was sex between the intern and one footballer on Saturday evening; but that it could have been consensual. The worker also confirmed that the girl had been dismissed by the hotel.

I tried calling the woman after the hotel worker gave it to me but it's been mteja all day.

This is not the first time we have heard of such indiscipline amongst Harambee Stars players. In the past we've seen pictures of some players having fun in pubs just days before a big match.

Someone is definitely sleeping on the job.

Well, keep it mpasho as we do intend to keep pursuing a testimony from the woman concerned.