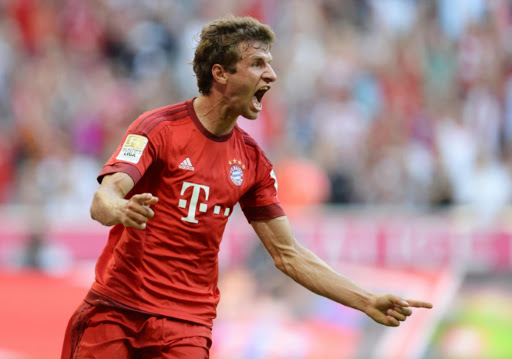 Thomas Mueller says Germany need to recapture their 2014 World Cup-winning form -- and settle a score -- against Poland in the first of two key Euro 2016 qualifiers on Friday.

By their own admission, Joachim Loew's side have been below-par since winning the World Cup final in Rio de Janeiro and find themselves in the usual position of being second in Group D, a point behind leaders Poland.

The Germans host Poland, then face third-placed Scotland in Glasgow on Monday, and as Germany goalkeeper Manuel Neuer says "we need six points".

First up, Loew's team are out to avenge their historic 2-0 defeat to Poland in Warsaw last October - the German's first loss to their neighbours - which was followed by a 1-1 draw at home to the Republic of Ireland.

"We have a score to settle with Poland," said Bayern Munich star Mueller.

"They are first, we are second, of course, we want to pass them in the table, but it's going to be tough work, we know that.

"We need to play the sort of football again which we haven't seen for a while."

His Bayern team-mate Robert Lewandowski will lead Poland's attack and Mueller says keeping the hot-shot striker quiet is a factor: "but it's not just about Lewandowski, we have to stop their counter-attack and defend the space as well."

As German daily Die Welt pointed out, a poll of Germans suggest the euphoria of the Brazil triumph has faded with only 13 percent believing their side will win the Euro 2016 title in France.

"After a year of not really playing like World Cup winners, we are in a bit of a tight spot and these are two games of truth," surmised Loew.

Poland arrive in Frankfurt looking to complete the double over their neighbours to stay top of the group.

"Before the first match in Warsaw nobody believed we could beat them, but we did," said defender Kamil Glik.

"Impossible is nothing in football. Of course, every game has its own story, but I hope this Friday's tale will be also good for us.

"I can see that in general, more and more teams in Europe want to avoid Poland as an opponent and that means we've become a good team.

"We have nothing to lose in Frankfurt. We want to confirm our qualities."