How life changed for Anita Nderu after she became a mum

Anita's daughter was born in August 2022

• Anita Nderu is celebrating her almost five months journey with her daughter, Kaya.

• Anita said they only told a few close friends and family. 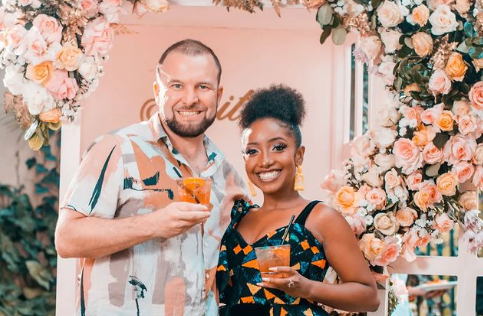 Anita Nderu and her husband Barret.

The mother of one penned a long message on her Instagram page narrating how life changed since she learnt she was expecting a baby.

She said when they learnt they were expecting a baby, they did not want to reveal the good news to their fans until they were sure everything was okay.

Anita said they only told a few close friends and family.

"Can you believe it? This time last year we had just found out we were pregnant with her and were going through the don't tell anyone phase in case it doesn't work out.

Our Gyna was against the secrecy because she felt if it didn't work out we would need the emotional support and how can you be supported when no one knows what you are going through.

Our families knew so we told our entire inner circle then life went on as usual until we heard her heart beat for the first time❤️ It felt so real then!" she said.

Anita further explained how her baby's heartbeats sounded at first saying she was super excited.

"I listened to it often almost as a reminder that Peanut was real because I wasn't showing.

Fast forward to when we were in San Fran and I wake up one morning look down and I could no longer see my vagina I had a bump!

I was so excited! None of the pregnancy ills no matter how bad they got took away from how much I enjoyed being pregnant.

I thought I never wanted it to end until we met Peanut whom we named Kaya Gacheri Catalina Raftery."

Speaking about her first experience with her daughter after she was born, Anita said she didn't experience the love at first sight.

For her, it was more like shock and fear and the will to learn.

"I thought something was wrong with me cause I didn't experience that overwhelming love spoken of immediately.

It came though about 2 weeks later when I was looking at her in her bassinet and I felt like my heart would explode with love❤️ It's been such a fun couple of months, everyday class is in session with Nippie Suckle.

She smiles so much, her farts smell horrible but I love them, they hit you in waves like perfume, I love breastfeeding her even though my milk is no longer there," she said.

Anita added that she loves falling asleep with her in her arms as she is awake more .

"She's asleep next to me right now and I'm excited for her to wake up so we can hang out because she is awake more now and loves to do stuff to keep busy.

She is making suckling noises as she sleeps, that makes me smile.

Also she has outgrown her bassinet already and she rotates in her sleep so you find her limbs hanging out like a jail bird."

Anita Nderu got married to her husband Barrett in 2021.

Anita Nderu just shared the current mom's life dilemma she is going through. According to the overdressed cook, her hairline has decided to bid her ...
Entertainment
3 weeks ago

'I love being your wife and being in your life,' Anita Nderu's cute message

Media personality Anita Nderu celebrated her hubby's birthday by penning a cute message to him.In a long post on her social media platforms,
Entertainment
2 months ago