Pastor T thought once he got married women would stop pursuing him.

• Pastor T says women are no longer able to tempt him. 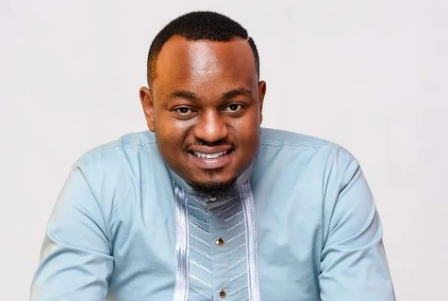 Pastor T Mwangi. He has exposed the content of his DM.

Pastor T Mwangi has revealed the content of his DM from women.

The father of two in an interview with Massawe Japanni says he thought once he got married women would stop pursuing him.

Sadly that has not been the case.

Do women hit on you? Questioned Masawe

To which Mwangi responded

"Yes, they do. I remember one woman telling me how happy she was as I was now a married man. Adding that she knew it would only be the two of them (She and the wife).

She said she was happy because now I would be more careful as I would have two women in my life."

" I thought when I got married women would get the message and let me be but that was not the case."

Mwangi gushed about his family. Asked why he keeps them private, the man of God responded

"I am married with two kids.2 and a half while the second is almost turning 1. I have been reading about the lives of people who have influence especially politicians.

They do not expose their families, I am also preserving my family."

The man of God says he is the one who chose to be in the limelight hence his family should not be punished for that.

"Let the criticism be on me instead of my family."

How does he handle social media trolls?

"I consider social media where people are doing things for fun, I do not take things personally."

'Women were my biggest problem after I got saved' Pastor T

Pastor T has advised people not to castigate Christians when they slip and backslide.
Entertainment
1 week ago

Pastor T under fire after claiming that G.O.A.T is associated with satanism

City Pastor T Mwangi has come under fire by a section of Kenyans after alleging the slang 'GOAT' is associated with Satanism.
Entertainment
1 week ago

Kanyari said Pastor Ng'ang'a has invited him to his church since there are many single women.
Exclusives
2 weeks ago