Diamond is afraid of snakes and cats

• Diamond has gotten a snake as a pet 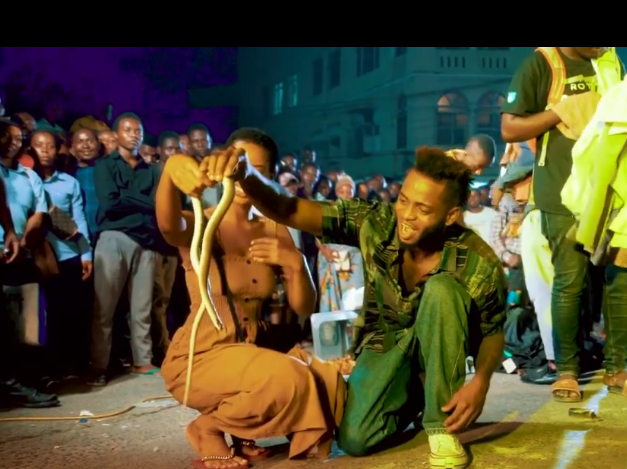 WCB's boss Diamond Platnumz has caused a buzz online after announcing he wants to keep a snake as a pet.

Diamond who shared a video playing with a snake which he described as his new friend said he has always been excited to have a snake.

"Have been always excited to have my own snake as a pet.... guys meet my new Friend #Chichi," he shared on his Instagram page.

His sister Esma said she was surprised that her brother can boldly play with a snake yet he is afraid of their dogs.

Other fans are speculating he is shooting a music video.

A few days ago, singer Nameless was left surprised after his firstborn daughter Tumiso Mathenge was captured playing with a python.

Tumiso courageously held on to a python at an animal park while her father was almost screaming his lungs out for fear.

The father of three shared the video on his social media platforms saying, "Like really?! Like really?! Hell no."

A few months ago, Karen Nyamu's first baby daddy DJ Saint was also dazzled by his daughter's courage to hold a snake with no fear.

Karen took her kids to a park where there were different animals.

In one of the videos shared by Karen on her Instagram, her daughter said they want to have a snake as a pet.

Karen's baby daddy shared a photo of his daughter and praised her daughter for conquering his biggest fear. DJ Saint went ahead to state that he would never try that.

"I can't believe my princess conquered my biggest fear😨 and held a snake.....I'd never try that, catch me dead!!!"

Another celebrity who has talked about having a snake as a pet is former Machachari actor Ian Nene.

He said he would want to keep a snake as his pet. He captioned the videos;

"A day filled with ❤️❤️ and a desire to own my own pet snake."

In one of the videos, Almasi was seen happily dancing with his Hindu friends.

A fan identified as merab_weri commented saying spirituality is the most peaceful thing and that he should 'keep doing you'.

Another fan said, "You look way too good with that snake on. I want  one too actually."

Almasi responded by saying that he would be getting one once he gets his own space.

Actor Ian Nene- "I became a frequent weed smoker to keep me going after sinking into depression."
Entertainment
6 months ago