Nicah narrates how her family reacted after meeting her bae Slahver

• Nicah has introduced her granny to her social media in-laws saying she inherited most of her looks from her including her big Nyash. 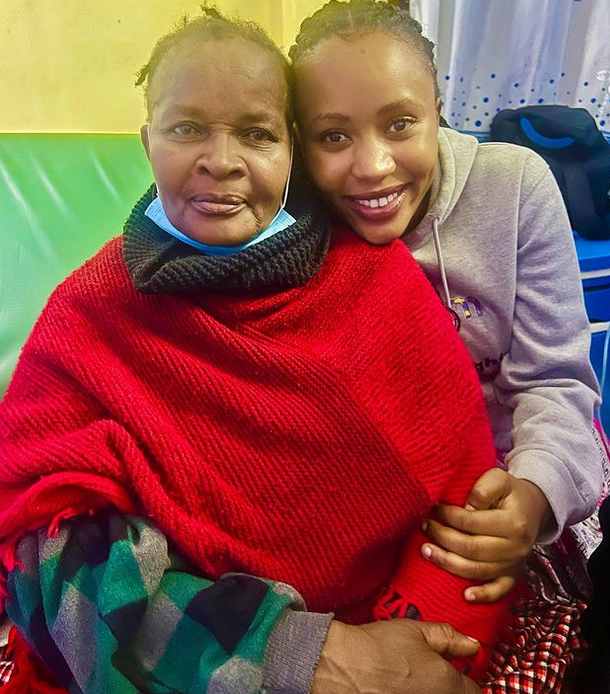 Nicah with her grandma
Image: COURTESY

Gospel artist Nicah The Queen has hilariously narrated how her daughters were left confused after her bae met their grandmother.

In a long post on her Instagram page, Nicah introduced her granny to her social media in-laws saying she inherited most of her looks from her including her big Nyash.

She said she recently visited her with her lover, DJ Slahver.

In the post, Nicah said her grandma was happy to meet Slahver and now her daughter thinks he is her granny's bae.

"My beautiful Grandma and I…. She’s so beautiful and full of Jokes! You see all these curves I carry I inherited from her and I can see my daughters have inherited the same!

I took @slahverdon to meet her and according to our culture, My husband is my grandma’s husband as well…..

Immediately she saw Slahver I think his looks and his soft-spoken won her heart!

She started complaining how her feet had been swollen for some time now and @slahverdon took some oil from my bag and started massaging her feet."

Nicah added that it is now hard to convince them that Slahver is in his 30s.

"Weeeeh Now kukhu started narrating how she met Slahver during her youth and it was so hilarious my daughters thought it was a true story and started questioning Slahver’s age.

Till now my daughters are not convinced that Slahver is in his thirties even after we showed them his passport and I. They think I’m dating an old man with younger looks! #jesusgurl."

The couple recently celebrated their second anniversary to the dismay of many who thought the union wouldn't work.

Nicah added that people will be shocked to see her marriage work.

Nicah was reacting to a local blog that said her marriage to DJ Slahver won't last.
Entertainment
1 month ago

It's a Yes! DJ Slahver proposes to singer Nicah the Queen

Gospel singer Nicah the Queen is officially off the market after being proposed to by her lover DJ Slahver.
Entertainment
1 month ago

Kenyan Disk Jockey Dj Slahver and his lover Nicah the Queen are celebrating two years of being together as a couple.
Entertainment
2 months ago