Lillian Nganga weighs in on Chiloba friends not attending his funeral

• Some of them have come out to defend themselves The matter of friends abandoning the late LGBTQ activist EzraChiloba on his send-off is weighing heavily on the mind of Lilian Nganga.

The former Machakos First Lady has penned her thoughts about it, advising people to focus on family.

Many of his friends who paid tribute to the late Chiloba were not spotted at his send-off, and Kenyans took note of that slamming them for not being real.

Those who were adversely mentioned include Michelle Ntalami, who later defended herself from the accusations of one KOT, who tagged her.

Ntalami pointed out that it doesn't mean that those of them who did not attend the send-off loved him any less. Rather she said they paid their respects in their special way.

“First of all, address him properly; HIS friends. Secondly, you don’t know any facts for you to be running your mouth like this. Some of us showed up and paid our respects in ways you may not be privy to. Those who didn’t or couldn’t manage to don’t love him any less! You are one of those keyboard warriors just waiting to see who attended and who didn’t just to make people look bad. How about you post a tribute for Edwin Chiloba and remember him in love instead of all this bitterness? If not, let him rest. He is loved, and his love WINS,” she responded.

She shared that they held a night vigil in honor of Chiloba.

“I had the most wonderful time today with the community, holding space for our friend Edwin Chiloba. Deeply honored to make the speech and tribute to him. Let’s forever hold those close to our hearts the 5 things that we’ll remember him for,” she wrote.

The mother of one told;  "Love makes the world go round and it also stops it.

She also shared that "From the Chiloba murder and many other cases we see every day we cannot deny that ...love is the greatest emotion in the world and it brings out the best and the worst in us.." 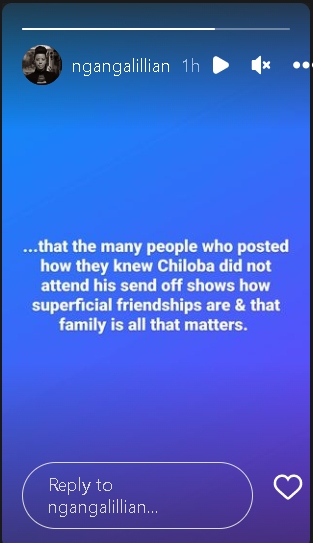 Michelle Ntalami comes clean on why she missed Chiloba's burial

Family describes Chiloba as a God loving person during burial

Pritty Vishy calls out celebrities for not attending Chiloba's burial