She was a full captain at the airline who had done solo flights.

• Her husband Dipak Pokhrel had also been co-piloting a Yeti Airlines flight when he died - and it was his death that spurred Anju to pursue a career in aviation.

•Distraught at her loss, alone with their young child, Anju's grief became her motivating force. 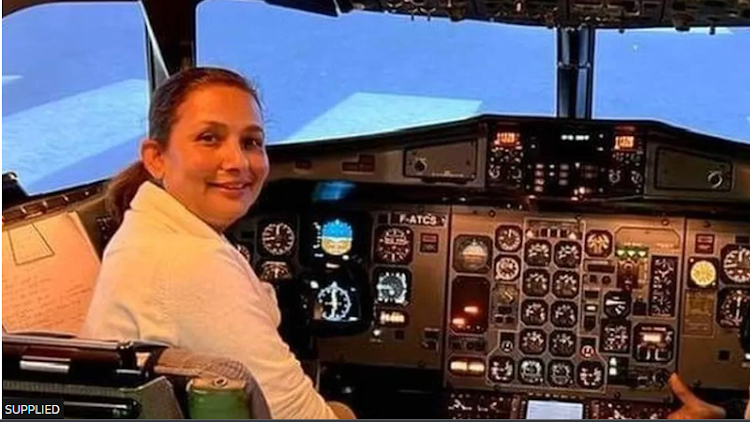 The co-pilot of the ill-fated flight that crashed in Nepal on Sunday lost her husband in a plane crash 16 years earlier, it has emerged.

Anju Khatiwada was co-piloting Yeti airlines flight 691 when it smashed into a gorge near the tourist town of Pokhara, killing all on board in the country's worst air disaster in 30 years.

Her husband Dipak Pokhrel had also been co-piloting a Yeti Airlines flight when he died - and it was his death that spurred Anju to pursue a career in aviation.

Distraught at her loss, alone with their young child, Anju's grief became her motivating force.

"She was a determined woman who stood for her dreams and fulfilled the dreams of her husband," family member Santosh Sharma said.

Dipak was in the cockpit of a Twin Otter prop plane which was carrying rice and food to the western town of Jumla when it came down and burst into flames in June 2006, killing all nine people on board.

Four years later Anju was on the path to becoming a pilot, overcoming many obstacles to train in the US. Once qualified, she joined Yeti Airlines.

A trailblazer, Anju was one of just six women employed by the airline as pilots, and had flown close to 6,400 hours.

"She was a full captain at the airline who had done solo flights," Sudarshan Bartaula from Yeti Airlines said. "She was a brave woman.'

Anju later remarried and had a second child as she continued to build her career. Friends and family say she adored her job, and was a delight to be around.

At the crash site in Pokhara, parts of the plane Anju was co-piloting lay scattered on the banks of the River Seti, strewn like battered pieces of a broken toy. A small section of the aircraft rested on the gorge, windows intact and the green and yellow of Yeti Airlines still visible.

This week's tragedy has reignited a conversation about airline safety in the Himalayan nation, which has seen hundreds die in air accidents in recent decades.

Over the years, a number of factors have been blamed for Nepal's poor airlines safety record. The mountain terrain and often unpredictable weather can be tricky to navigate, and are often cited as reasons. But others point to outdated aircraft, lax regulations and poor oversight as equally important factors.

Outside the hospital in Pokhara, families of those killed waited for the bodies of their relatives to be released after their post mortems had been completed.

In the bitter cold January air, Bhimsen Ban said he was hoping he could take his friend Nira back to her village soon so her last rites could be performed.

Nira Chantyal, 21, was a singer who often flew with Yeti Airlines. Low cost air travel has become an affordable and popular way for the country's middle class to traverse the mountainous nation.

Nira, who had moved to Kathmandu, had been on the fight on her way to perform at a music festival in Pokhara.

"She was a very talented artist, and used to sing folk songs. She would often sing spontaneously," Bhimsen said, his eyes red from crying.

"I have no words to describe the loss."

David Rudisha and his team involved in a plane crash

World 800 meters champion David Rudisha was on Saturday involved in a plane crash at Imbirikani in Kajiado county.
Entertainment
1 month ago

At least two people were on Thursday, December 8, killed when a light aircraft they were flying in crashed within Tsavo National Park.
News
1 month ago

Boy, 4, who survived in the Tsavo for 6 days alone rescued

A four year old boy who had been reported missing has been rescued alive. The young lad was found alone in the Tsavo National Park where he had
Lifestyle
1 month ago