The couple are referring to themselves as husband and wife

•They have been together almost three weeks

•The new bae says he will give her anything she demands 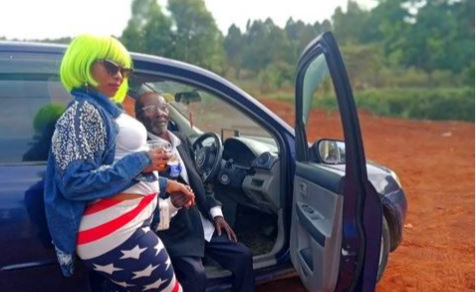 Manzi wa Kibera has been dating a 65-year-old man for a couple of weeks now.

After unveiling him to the public recently, the socialite told that 'he gives me the soft life' and that

The two are not ready to reveal his name or any other personal details.

"in due time he will tell who he is" she said.

She added that he gives her the attention she craves and money to top it off.

How did they meet?Manzi was at the time in the news proposing to Mumias East Mp Peter Salasias who outright rejected her.

She felt disappointed but luck was in her lane.

The 65-year-old man noticed her and took her number.

She gushed over their new found love as the man whose identity remains a secret also told that Manzi is practically his 'wife'.

He told off critics of their age difference that

What made him fall in love with her?

The first wife died in 2007, all through he has been single until now.

He is so in love with her he is willing to give her anything including his car keys, all she has to do is ask.

"Hii kazi si ngumu nimezoea" he continued when asked about handling a feisty woman like the socialite.

The 65 year old also dismissed Mumias East Mp for calling Manzi indecently dressed. "ataongea atachoka"Here are photos of the lovely couple and the soft life he is offering:

Nigerian men are known to be flashy something that matches Shakilla's love for a flashy lifestyle.
Entertainment
1 week ago

Maria show actress Dorea Chege has been inspiring her fans with her cute bae, Dj Dibul. The couple has opened up about how they met, and their love ...
Entertainment
1 week ago
WATCH: For the latest videos on entertainment stories