Lupita says the weight training under water helped with her breathing.

• Wakanda Forever 2 is to honor the legacy of Chadwick Boseman. 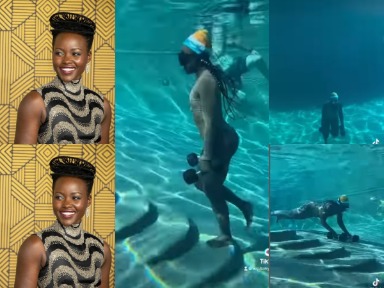 Lupita Nyongo. She did underwater training for Wakanda Forever 2.

Award-winning Kenyan actress Lupita Nyong'o says she was an amateur swimmer before they shot 'Wakanda Forever'.

Lupita was responding to a viral video of her walking with weights underwater. Many were awed by the video because of how flawless her moves were.

Speaking in an interview with Rotten Tomatoes, Lupita shared; "Before this film, I was an amateur swimmer and I had to get comfortable with water.

I did swimming training and I also went further and did extreme performance training where you walk with weights underwater.

When I saw someone doing it, I was like I cannot be able to do this. But in a week and a half, I was doing it."

"It helped with my breathing and I found comfort in the water. You need to be very calm in water for you to succeed. I never thought I would act underwater," said, Lupita.

Wakanda Forever 2 is to honour the legacy of Chadwick Boseman and won't recast the role of T'Challa.

Check out some of the reactions below;

tedashii: Why my hands sweating watching this lolll. I’m nervous for you and I already saw the movie.😂👏

blaqmoss_: This why I don’t understand the the comparison to Black Atom. The details put into the black panther universe are unmatched.

koko_divoire: How are you holding your breath that long? I got asthma just watching.

melaninqueensonly: You made me wanna learn how to swim.

l0labee: One thing about Lupita, she’s gonna execute any role by any means😮‍💨🙌 put some respect on her name🔥

thelifentimesofphilipjnr: People see a 1 min clip in a movie and don't realise this is what it took to get that 1 min.

itsgwendolyn: Beautiful Lupita! Thankyou for sharing this! Those incredible swimming minutes we get to experience took hours of your training and I’m glad you’re showing us the work it takes!

The intense underwater workout Lupita Nyongo did for Black Panther

Lupita Nyongo has shared a video of how she trained for her role in Black Panther Wakanda Forever. In the clip, one can see Lupita even using weights ...
Entertainment
2 weeks ago

Instagram is a major social media platform and Kenyans have not been left in the dark either. They are mostly using it for business and socializing.
Entertainment
3 weeks ago
WATCH: For the latest videos on entertainment stories