The rapper was in Zimbabwe for a concert

• Ross was paid 175k dollars for an hour-long performance.

• Many don't know if he will drop by Tanzania. 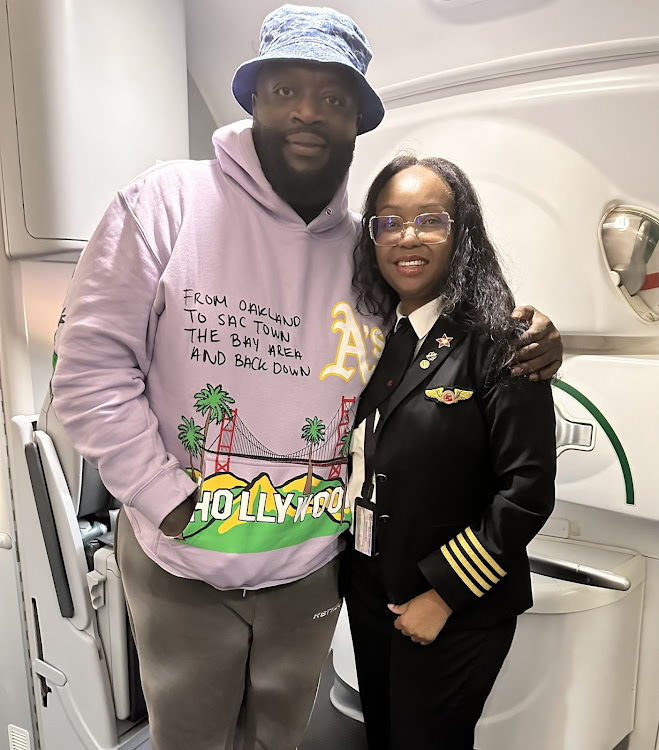 Kenyan Pilot Captain Irene Koki Mutungi had a huge celebrity on her flight recently. The top pilot disclosed this great news on her social media, saying that it was a pleasure to have had him among her passenger manifest.

"Hanging out 43,000ft with the business mogul, rapper, the boss Ricky Rozay @RickRoss. It was a pleasure flying you."

It is not clear if it was a photo opportunity after landing or before taking off.

Rick Ross was in Zimbabwe over the weekend. Videos of the business mogul feeling hyped up by traditional dancers amused many.

He had been invited by the event's venue, Harare International Conference Centre to perform which they termed the biggest Hip Hop concert to grace Zimbabwe.

MTV Base was also part of the red carpet, Nasty C was present among others. Ross was paid 175k dollars to perform, for 50 minutes.

Many curious Kenyans are wondering if he will drop by Kenya or Tanzania where socialite Hamisa Mobetto lives.

Earlier this year, the Tanzanian model and the Maybach Music founder had a live session on Instagram where they talked about her new EP and answered a few questions from fans.

Previously, the duo had denied any romantic link maintaining that they were very good friends. But their meet-up in Dubai in November 2021 prompted even more rumours.

Ross was thereafter interviewed by a Tanzanian radio host where he said that he and Hamisa were close, but he would leave the explanation of the nature of their relationship to her.

“To be honest, there is a connection but then I’m going to leave it to her to explain the nature of the relationship we share,” said Ross.

He added; "She is such a beautiful person, beautiful spirit and she is a huge entrepreneur and I want to help her take it to the next level because she is doing a great job and I’m proud of her."

Responding to a question on their live session on Instagram about whether he was dating Hamisa or not, the Bellaire founder said: "They wanna know if we are dating?" he asked Hamisa, adding, "Yes, she is mine."

The Maybach Music Group boss also told the mother of two that he would like to spend some quality time with her and enjoy and she asked him when he was going to marry her?

"My mother wants cows. You know the last time you guys spoke...she asked when you are bringing the cows for dowry, and I told her I'm gonna talk to him," she said while laughing.

Hamisa Mobetto on using witchcraft for her relationships to prosper

Anerlisa Muigai to settle and become a mum next year

Anerlisa will keep some relationship details private
Exclusives
2 weeks ago

Body of Kisii woman who died in Lebanon arrives