• Alvin Kaunda, and his camerawoman awarded with a three-day safari in Kenya’s most famous game reserve, the Maasai Mara. 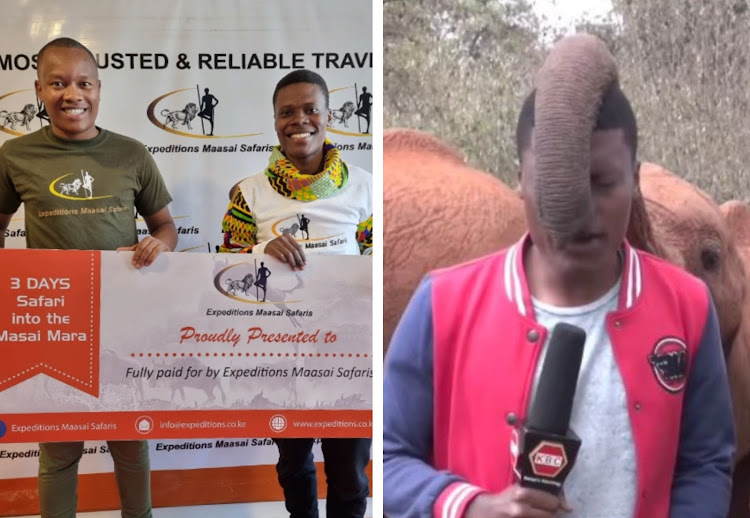 Alvin Kaunda, the KBC journalist whose video of a baby elephant interrupting his live reporting went viral has been rewarded by Expeditions Maasai Safaris.

The travel agency rewarded Alvin Kaunda, and his camerawoman with a three-day safari in Kenya’s most famous game reserve, the Maasai Mara.

In the viral video, Kaunda was reporting on wildlife conservation at the Sheldrick Wildlife Trust when one of the adopted baby elephants interrupted him on camera.

Through his social media, the now-famous journalist, Kaunda said that he hopes the viral video will encourage people to protect and care for wildlife.

He then thanked the tour company for making his dream of visiting the Masai Mara come true while at the same time commending the efforts of leading conservationists in Kenya.

"While at the Shedrick Trust, I got to appreciate the incredible work wildlife conservationists do to protect our wildlife. I wish to encourage everyone visiting Kenya to support conservation efforts led by Dr Paula Kahumbu and other great Kenyans," he said.

He said they are proud of the journalist's determination to report on the importance of protecting endangered species even during difficult circumstances.

"As a champion of sustainable tourism, we recognise and appreciate the role of journalism in supporting these important conservation efforts in our parks and reserves," Karema said.

The video of the light moment drew mixed reactions from Kenyans.

Here are some comments;

"I bet the elephant knew exactly what it was doing, it had its eyes on the camera all through the mischief," a Twitter user stated. "The Jumbo had something to say."

"Man this guy is so brave. If I was the one, I would have wounded up the clip immediately and taken off," read another comment.

Kaunda explained that the clip was part of a feature story covering how orphaned elephants are taken care of amid the ravaging drought that has led to the death of several in national parks.

The feature will premier in the coming weeks.

Watch: Video of KBC reporter being ‘harassed’ by an elephant goes viral

A KBC journalist has left Kenyans in stitches following a hilarious encounter with elephants.
Entertainment
3 weeks ago
WATCH: For the latest videos on entertainment stories

Tourism Board gets new CEO as Betty Radier exits