• Karen and Samidoh allegedly meet in the US

• Karen was spotted wearing his cap 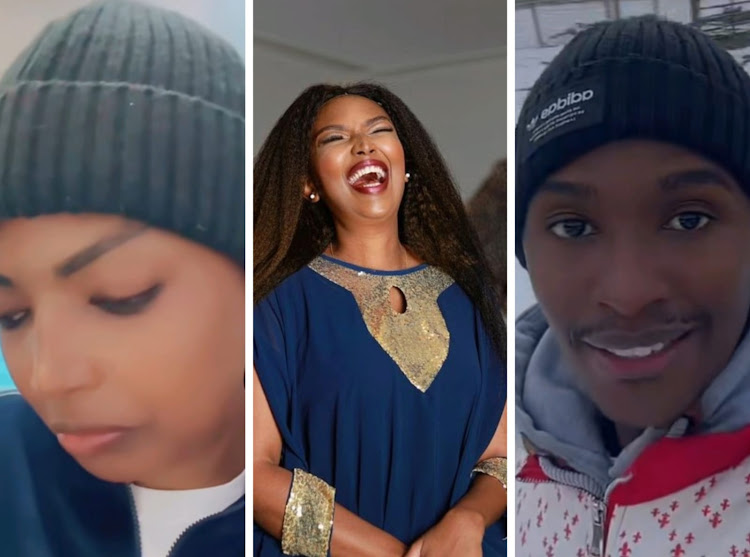 Karen Nyamu and Samidoh sharing clothes in the US (evidence)
Image: courtesy

Nominated senator Karen Nyamu and her baby daddy have allegedly met in the US.

The mother of three has constantly defended her visit to the US after Netizens theorized that she is there to visit Samidoh, who is currently on a musical tour.

Karen flew to the US last week for an ICT training after a whole week full of drama surrounding her and Samidoh's music promoter Bernice Saroni.

Karen shared a photo of her in the US with a caption that read;

"Kanairo galdem wenu anawamisiii! After days into my course on how ICT can strengthen devolution and deliver progress, finally it was weekend! Enjoy yours guys."

Kenyans did not buy her reason to be in the US despite her saying she would never follow her man who is working.

In the video, Karen wore a black Beanie cap and fans said it resembled one which Samidoh wore a few days ago while doing a video with Bernice.

Here is the video;

In the comment section, fans speculated that the two have already met in the US. Check out reactions from her fans;

wairimu chege: ii need this type of strength. I must chase what belongs to me either second hand or camera.

A few days ago, she was also forced to explain the reason her baby daddy Samidoh has never posted her on social media.

Karen had shared a video jamming to Samidoh's song on TikTok and fans said she was forcing 'issues'.

Samidoh has sired two kids with baby mama Karen Nyamu and three with his wife Edday Nderitu. Karen was singing Samidoh's song 'Twana', a song that talks about the singer wishing the very best for his children as he was raised in a humble background.

Fans had a mixed reaction towards the video with some praising Karen for being a 'don't care.'

A fan identified as Safetyequipmentsplug told Karen that despite trying too much, she would never get married to Samidoh.

Another fan, Miriam Kaburo asked her why he has not posted her online.

Karen Nyamu said Samidoh was a gentleman who cared about his first wife.

"Very simple. He's a gentleman and a very considerate man. He knows it will hurt the first lady (Edday). She deserves respect."

Nominated senator Karen Nyamu has explained the reason her baby daddy Samidoh has never posted her on social media.
News
3 weeks ago

Nominated senator Karen Nyamu has had to fight with Kenyans online who have been peddling conspiracy theories about her recent trip to America.
Entertainment
3 weeks ago

Samidoh's host blasts Karen Nyamu tells her to move on