• The journalist was highly influenced by his dad, a chief.

• However other influential people wanted him to become a teacher instead . 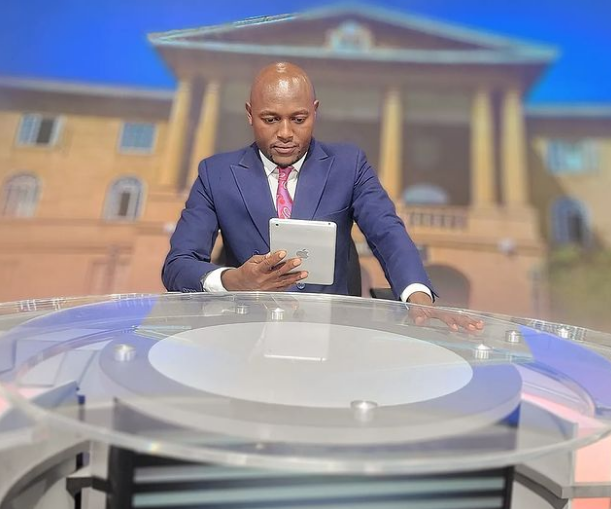 Journalist Stephen Letoo of Citizen TV keeps Kenyans up to date with the world of politics. The seasoned political journalist has been in the media for slightly over a decade and his knowledge of current affairs is impressive.

Most notable is his coverage of politicians traversing the country ahead of the August 9 polls.

The RMS journalist got candid about his journey recently. Speaking to the Iko Nini podcast, Letoo recalled that moment a good friend helped him secure an opportunity at Citizen TV.

He revealed that the friend was a former classmate who was a news director at the time and secured for him a position as an intern, as he continued with his education at the University of Nairobi (UoN).

This was a dream opportunity for him, so he ensured he worked hard to stand out from the crowd.

"One of my classmates was a news director and he saw that I had a passion for journalism. He made plans for me to enroll at RMS. After four months, I perfected my craft." he told

"I would utilise my opportunity by arriving early enough to handle morning tasks before other journalists arrived. They would look for someone to do the assignment and since others were not in the office, I would be the one selected," Letoo added.

They say that hard work pays, and his determination saw him get the attention of his bosses who rewarded him for his effort. This was in his third year at UoN.

"In 2013, I was poached by Kiss TV to cover the General Election. I gave it my best and managed to get noticed by my former employer. Three years later, Citizen TV poached me again from Kiss TV and I have worked there to date," he noted.

One of his biggest influences to become a journalist came to light early in life and mostly through his dad.

"My father was a chief, hence the whole community would come to our homestead to watch the news on the great wall TV. As a result, my father would call us names based on the anchors on TV. I always used to wonder why he was so engrossed with the news anchors to the point that I developed an interest."

His father saw it best to transfer him to safer regions over frequent cattle rusting at home. He joined a primary school in Kisii.

After passing his KCPE, he joined Kabianga High School, Kericho County. At the time, he founded the journalism club in the school and began reading news in the assembly on Mondays and Fridays.

Sadly, his dad died in 2008, just when he was to sit for the end-year KCSE exam the following year. There was strong resistance from community leaders who wanted him to become a teacher, not a journalist.

They argued that as a firstborn, Letoo's main responsibility was taking charge of his siblings after the death of his dad. Teaching was a career that would allow him to become a father figure.

"In 2008, when I was about to do my KCSE in 2009, I lost my father which really affected me. Some of the elders of the community also told me that I couldn't pursue journalism since I lacked a father and I had to care for my other 12 siblings," Letoo stated while pointing out that he was close to yielding to the elders' demands were it not for a split moment decision by an unexpected family friend.

"On the day of selections, we had a conversation with the chairman of the elders who convinced me to chase my dream and pursue journalism. I ended up enrolling at the University of Nairobi and here we are," he stated.

Dida from the Swhili telenovela Sultana on Citizen tv has been battling breast cancer.
Entertainment
1 month ago
WATCH: For the latest videos on entertainment stories

Journalists who quit to join politics