'Msimwibie...' KOT gets witty with Ruger's arrival in Kenya

Ruger will be performing in Meru, Kinoru stadium on Saturday

•The concert will be on 8th October at Kinoru stadium. Tickets are going for 1000-advance and 2500 for VIP.

•Netizens were pleading that people attending the concert would not steal anything from him. 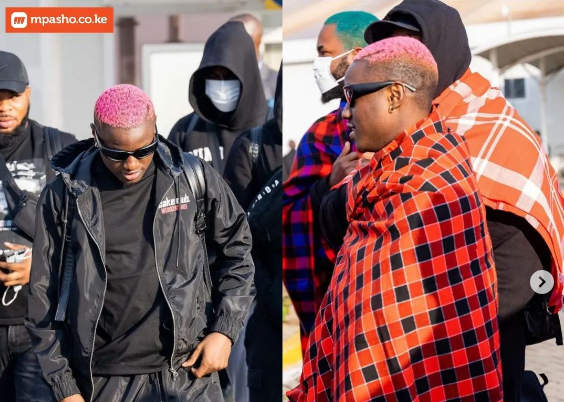 Nigerian star Ruger arrives in Kenya. He is set to perform at Kinoru stadium .
Image: Courtesy

Nigerian singer Ruger has arrived in Kenya ahead of his eagerly awaited concert in Meru. In the true Kenyan spirit, netizens had one concern and plea, 'don't go Fave style on him.'

After the last escapade with Fave and her bag, Kenyans decided to get witty in the comment section,

mkoorea: We are prayerful nation we ain't turning up for the show nomo😂😂

tim.muchiri: He cooks good music that's why he is called Ruger 😄😄 "If you know you know"

The concert will be on 8th October at Kinoru stadium. Tickets are going for 1000-advance and 2500 for VIP.

The 'girlfriend' hit maker will have a press conference tomorrow at Sankara, at 3:30 pm.

Despite the importation, Kenya has also been exporting, as Nyashinski was in Tanzania where he delivered an electrifying performance.

The 'Mungu Pekee' hitmaker was headlining a concert dubbed ‘Unmasked Edition’ together with Nigerian singer and songwriter Ruger among other stars.

The rapper used his socials to express gratitude to his Tanzanian fans for turning up in large numbers to attend his show.

“Dar Es Salaam, thanks for the love and support. Nawapenda 🖤,” read a post from the star.

He also appreciated their effort to support his music - enabling him to continue producing more hit songs.

Nyashinski landed in Tanzania with his business associate and music producer Cedo plus members of his band.

During the show, Nyash brought Juma Jux on stage as a surprise Act.

Together they performed their 2019 collaboration 'In case You Don't Know' and fans loved it.

“For the first, I got to share the stage with my brother Juma Jux. What a privilege! Shukran bro,” Nyashinski shared.

Kenyan Musician Nyashinski delivered an electrifying performance in Dar es Salaam, Tanzania over the weekend and fans loved it.
Entertainment
3 months ago

Davido is however not the only West African star set to thrill Kenyans with Rema, also another Nigerian artist set to perform at the Mwanaume ni ...
Entertainment
9 months ago
WATCH: For the latest videos on entertainment stories