Maina says it is disrespectful for men to cheat on a woman.

• Maina advised that if a man must cheat, let him do so away from his wife.

• Mwalimu King'ang'i was of the opinion that wife's should not confront their husband's side chicks. 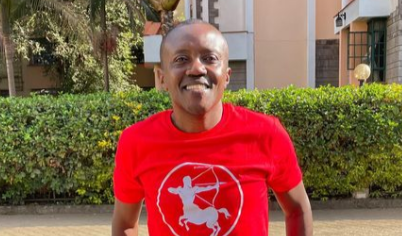 Maina Kageni. He says men who cheat should do so away from areas where their women frequent.
Image: Instagram

Radio King Maina Kageni has called out men who go to cheat in areas where their wives live or frequent.

He was reacting to a recent death of a woman who allegedly died while driving after her husband and his side chick.

Speaking during the Morning Conversation on Classic 105, Maina advised

"A wife has to mark her territory, it is a knee-jerk reaction that comes automatically.

If you must cheat, Take your side chick out of town and go hanya there.Why bring her to where your woman hangs around.? "Questioned Maina

He further stated that it was the man's fault that his woman was dead.

"It is the man's fault.Women are territorial, being protective is a knee-jerk reaction for them."

Mwalimu King'ang'i was of the opinion that the deceased should not have followed her man, something that led to her death

One caller narrated an incident in which her husband's side chick would visit him in the hospital where he had been admitted.

"I left my husband three years ago.He was in the hospital recovering from an operation.I found out that his side chick had visited him the previous day. I left him and it has now been three years."

Below are more reactions from the story

@_KijanaYaKiambu @ItsMainaKageni let it be a lesson to all other ladies to learn Otherwise angefaa apige picha and they go discuss it at home. Alf other thing is whenever u find a man having a side chiq it means that woman does not give him peace of mind either ni kisirani Kila wakati.

@native_kenya @ItsMainaKageniI honestly sympathise with this lady, first of all the lady was chasing this guy out of love, the guy was completely wrong in the first place. You can't bring a side chick to the same mall your wife goes to.

@MShariff1@ItsMainaKageniMaybe the woman saw this by coincidence. She should have taken photos if the whole thing or videos then confront the husband at home.

@susanmaina6034  @ItsMainaKageniIf a woman keeps monitoring/chasing her cheating husband, she's the one hurting herself both mentally and emotionally. Move on build on ur future with ur children. Buy maploti and commercialise it. Anything can happen na ufukuzwe with ur kids. Jipange!

Have you ever caught your partner red-handed cheating?

To celebrate their friendship a month ago, Ex Machachari actor Baha aka Tyler Mbaya gushed about his girlfriend Georgina.
Entertainment
1 week ago
WATCH: For the latest videos on entertainment stories