World leaders were bundled into buses to Buckingham Palace

• The French leader also arrived in his personal car 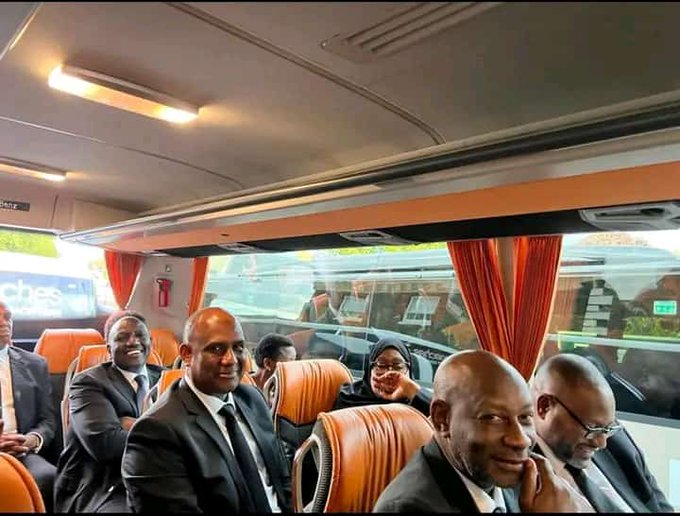 Pres Ruto in a bus in Queen Elizabeth burial

The arrival of Presidents and world leaders at the Burial of Queen Elizabeth II has elicited mixed  reactions online.

On the one hand, US President Joe Biden was ferried in a convoy of vehicles including the famous Beast, as others were bundled into buses to go to the ceremony. (PICTURED ABOVE)

Kings, Queens, Emperors, Sultans, Sheikhs, Presidents, and Prime Ministers all faced similar treatment as unlike Biden who had his presidential convoy on ground.

The Saudi, the French  Qatar, and the Brunei leaders however showed up in their own car.

A diplomatic reception hosted by King Charles II was also held for leaders at the Buckingham Palace.

The busses pulled up, and the world leaders flocked inside Buckingham Palace.

Queues, busses and royalty - it is all so very British. pic.twitter.com/raUQNAAcHX

However, in photos shared online, President Ruto was smile smiles aboard the bus. His white teeth stood out in the photograph that went viral as he posed for the camera.

@KateMiddStyle·11hReplying to @MonarchyUKOh my.... They're actual coaches, like the type we had for school trips. I had assumed they'd be on some kind of executive bus with leather seats and swanky paintwork. Ha, love it.

@royalbloopers·4hReplying to @MonarchyUKBut where did they gather before getting into those buses? Not my brain thinking the buses picked them up at their respective hotels/embassies/etc

The conversations were around the relationship the Royal family has had with the respective countries.

The leaders expressed their condolence messages to King Charles III upon their arrival in London.

Global leaders were ordered to give up their diplomatic cars and, instead, share transport while going for the burial.

The Queen will be buried with the Duke of Edinburgh at King George VI Memorial Chapel.
Entertainment
1 week ago

The Queens lying in state closed at 6:30am ahead of todays historic funeral
Entertainment
1 week ago
WATCH: For the latest videos on entertainment stories