• Sophia Wanuna was accused of not giving DP Rigathi Gachagua enough time to explain himself during the interview.

• The interview was held on Sunday night. 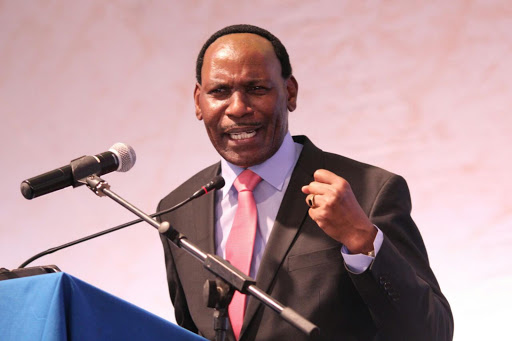 Ezekiel Mutua He has called out Sofia Wanuna for allegedly not giving DP Rigathi Gachagua enough time during an interview.
Image: The-Star

The interview which was held by TV Personality Sophia Wanuna has been trending after the Journalist was accused of allegedly being unprofessional.

Through his Twitter account, Mutua now says Wanuna should have given the DP more time to explain himself and elaborate his points.

"Eish. . .Sophia Wanuna, you are not interviewing a political candidate. Rigathi Gachagua is the Deputy President of the Republic of Kenya. Give him time to explain his points. You can conduct a professional interview without bellicose jingoism!"

Kenyans were divided with some asking Mutua to stick to his lane.

@martmartinels: If they fail to ask those that I call "hard quizzes" still you will say unprofessional... Mmmmmh.

@Patrickkimani_: She is a Journalist and fair to you that you are a deputy Jesus. Stick to your work.

@omwansaE: Arrange your interviews with DP and send here for marking

@DrPNyongesa: Wewe gwachana na Sophie, find other means of looking for a job from UDA!

@BenjahPatrobas1: Sir , with due respect, if your are looking for a job in the current administration stop being dishonest with yourself.nkt.

@FredRico4: There has been a misunderstanding among local journalists that for an interview to be impactful it has to be combative. Far from true. Two way communication encourages the best of both the guest and host .

@OgayaOgaya: You can do better to audition for a job with the new government without trying to bring down a fellow journalist. @SophiaWanuna is doing just fine.

During the interview, Gachagua also explained why he has not yet moved into his official residence in Karen.

He continues to stay in his Karen home despite President William Ruto moving to the state house the same day he took the oath of office.

"The things that are going on around me are very momentous. I'm yet to acclimatize, digest and accept the new situation and the status and all. It is very overwhelming. I will need to take some time but in due course I will move into the official residence,"  he said.

#Trending #KTNNews #livestream #ktnprime KTN News Live ~ Streaming Kenya, Africa and World news and programmes 24/7 Kenya's number one 24/7 news channel. KTN News TV keeps you updated on the latest news in Kenya and around the World. Watch Breaking and the latest news happening in Kenya, Africa and across the globe in real-time. Livestream KTN News SUBSCRIBE to our YouTube channel for more great videos: https://www.youtube.com/ Follow us on Twitter: https://twitter.com/KTNNews Like us on Facebook: https://www.facebook.com/KTNNewsKenya KTN News is a leading 24-hour TV channel in Eastern Africa with its headquarters located along Mombasa Road, at Standard Group Centre. This is the most authoritative news channel in Kenya and beyond. Watch KTN Live http://www.ktnnews.com/live Watch KTN News http://www.ktnnews.com Follow us on http://www.twitter.com/ktnnews Like us on http://www.facebook.com/ktnnews

DP Gachagua's directive to DCI lands him in trouble with Kenyans

Gachagua says that DCI officers being in government offices creates a toxic environment for service delivery.
News
1 week ago

Raila and Gachagua met on Friday morning at Moi Airport VIP Lounge in Mombasa.
News
1 week ago
WATCH: For the latest videos on entertainment stories