• In February, Mdee disclosed that Rotimi gifted her the new mansion worth Sh56 as this year’s Valentine’s Day gift.

• This is the third house the couple have acquired together 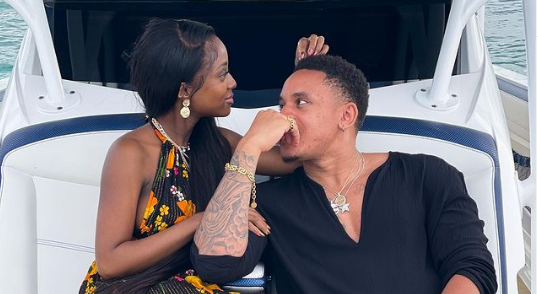 Tanzanian singer Vanessa Mdee, who resides in Atlanta, and her fiancé Rotimi have bought a house in the US in an effort to secure their future.

Mdee stated in a post that the new mansion was constructed entirely from scratch and is now available for rental.

“This investment life is great ✨ GOD WE GIVE YOU THE GLORY ✨ Another one of our homes, built from the ground up, furnished and ready to make money 💰,” Vanessa Mdee shared.

The singer offered a short video sneak peek of their new home, showcasing its interior while urging those in need to rent it out.

In recent months, Vanessa Mdee and Rotimi have purchased three mansions, including this one.

Vanessa and the actor bought their second Mansion in June. The couple revealed in an update that they are content to grow their empire by acquiring new properties.

The two also shared a little exciting dance to crown the occasion after buying their second house.

“Let your money 💰make money for you #Newhomealert #InvestInvest from the ground up,” wrote captioned his dance video while in front of their new mansion.

This was the second home the couple acquired together, four months after buying another six-bedroom mansion in Florida, United States.

In February, while in an interview with Tanzania’s Wasafi FM presenter Lil Ommy, Ms. Mdee disclosed that Rotimi gifted her the new mansion as this year’s Valentine’s Day gift.

How did you two celebrate this year’s Valentine’s Day? asked Lil Ommy.

Vanessa replied with an affirmation that their Valentine’s Day was awesome, as she got the biggest surprise ever, - a house.

"But this year was a bigger Valentine for me because he bought me a brand new house. It’s a brand new house in Florida, with 6 bedrooms, 5 bathrooms, and an exclusive area, and it costs half a million dollars $500, 00. And it’s under my name, so I’m the rightful house owner in the US,” said Vanessa Mdee.

Angry Vanessa Mdee calls out company messing with her money

Atlanta-based Tanzanian singer Vanessa Mdee has expressed displeasure in the manner which music distribution company Mziiki has been handling her ...
Entertainment
1 month ago