Rigathi Gachagua left Kenyans in stiches with the confusion

• Kenyans immediately responded to the funny situation on Twitter with amusing comments.

• Following Chief Registrar of Judiciary Anne Amadi, Gachagua appeared to hurry the words he was pronouncing while taking the oath. 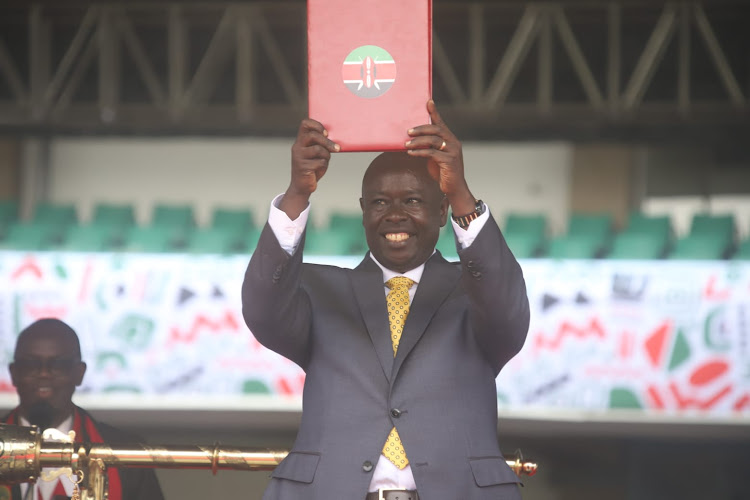 Deputy President Rigathi Gachagua who made a blunder during his swearing-in
Image: ANDREW KUBASU

Deputy President Rigathi Gachagua became an instant topic of discussion following a blunder he made while taking oath of office at Kasarani.

Following Chief Registrar of Judiciary Anne Amadi, Gachagua appeared to hurry the words he was pronouncing while taking the oath.

Gachagua stumbled over some of Amadi's phrases throughout the recital and was silent for a short period of time.

"....I will truly and diligently serve the people and the republic of Kenya in the Office of the Deputy President..." paused Gachagua.

He recited statements that were different from those Amadi was reading, though, so his recuperation was unbalanced.

Gachagua: "That I will diligently..."

Gachagua: ...discharge my duties and perform my functions in the said office.

Then, in an effort to address the confusion, Registrar Amadi asked that the oaths be administered from the top to ensure a smooth transition.

Sadly, Gachagua was unaware of her comments, and he continued to do the incorrect recital.

Kenyans immediately responded to the funny situation on Twitter with amusing comments.

angilaoluoch Riggy G was obviously nervous, I would be too, his wife should have held his hand at this point

phannoh Even just repeating Gachagua could not?

On Tuesday, William Ruto took the oath of office as Kenya's fifth president to thunderous applause from his throngs of fans.
News
2 weeks ago