• Anita and Barrett married in 2021 after a friend introduced them.

• Anita delivered her newborn baby a few weeks ago. 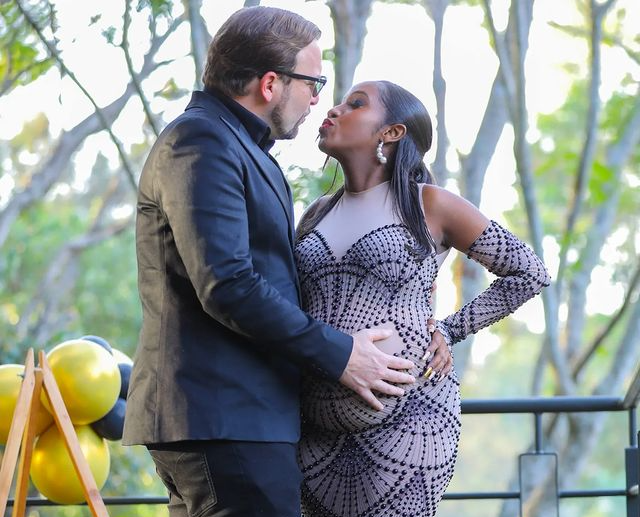 Anita Nderu and hubby Barrett Raftery. She has given an update on her pregnancy as delivery date nears
Image: Instagram

Award winning media personality Anita Nderu is marking her first wedding anniversary. On Friday September 8th, Anita paid tribute to her husband Barrett and gave a run down to her big date night.

Anita revealed that they didn't have big plans because she is a new mum who couldn't be away from her baby for too long.

"A year later and we've made magic of 365 and a quarter days and the most beautiful baby👶🏽Time really flies when you are having fun❤️."

So according to her narration on Instagram, the former Capital FM presenter told fans that all she could afford for the date was 30 minutes. Nothing more nothing less.

Anita said how life had humbled her after giving birth and added how she looks different and is struggling to find an oufit that will fit her with her new body.

"Wouldn't trade it for the world though, I've breastfed so much mpaka now my mammary glands can be scarves in this weather because they are just drained."

Anita added, "I'm trying to find the energy to look cute for tonight and we have the greatest friends."

Her friends told the couple that they would babysit to allow Anita have a nice anniversary date.

"And then I was like where can we go that will take like 30 minutes Real quick and come back home. If you see us at a local chicken spot, just know we are enjoying our anniversary so we can rush back home"

Anita described feeling overwhelmed not knowing how or what to dress in.

"I'm like my husband has seen me in so many deras in the last couple of weeks what's another dera you know!"

Anita was also contemplating going in her matuta. She added she will probably throw on a wig.

Her indecisive ness got her agreeing that just maybe she should try and look cute.

The celebrity showed off the look she put together. It will be interesting to see how the date went.

Anita's husband got his new mother in law a camel as a gift and Anita was thoroughly amused by it.

She told in a funny note

" The camel he got my Mum is still chilling and making friends in her new home, took us a while to figure out how to make a 🐫 a pet😄"

Anita Nderu pours out her heart as she celebrates 1st anniversary

Anita Nderu said it took her parents a while to figure out how to make a camel a pet.
Entertainment
3 weeks ago

Anita Nderu announced the arrival of her daughter on social media with her names and face.
Entertainment
1 month ago
WATCH: For the latest videos on entertainment stories