Homosexuality is not accepted nor tolerated in Uganda.

• Museveni says homosexuals and what they do is disgusting.

• He says that Western countries should stop interfering with African countries on matters sexuality. 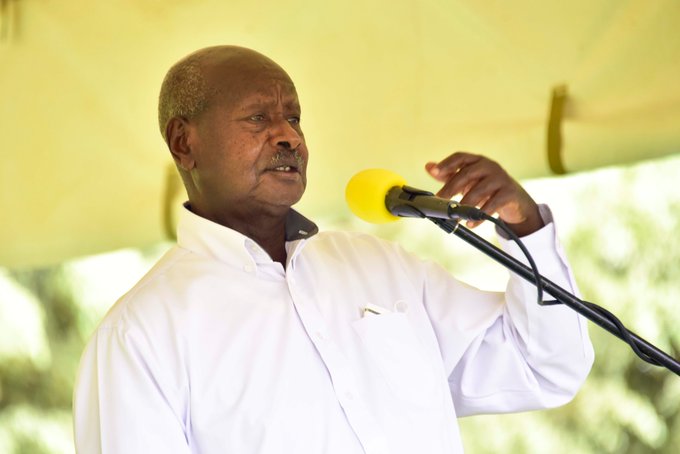 Yoweri Kaguta Museveni. He says homosexuals and what they do is disgusting.
Image: Twitter

The video reemerged after President-Elect William Ruto in an interview with CNN said he respects the queer community.

During a past interview with CNN, Museveni was asked what his message to Western Human rights groups was and he said;

"Respect African society and its values. Let us manage our society the way we see fit. If we are wrong we will identify by ourselves. Just the way we do not interfere with your business."

Do you dislike homosexuals? a question was posed to him.

"Of course. Homosexuals are disgusting. I was recently told what they do and it's disgusting."

On the issue of LGBTQ, this is how uncle Museveni answered...

"I am very clear that we respect everybody and what they believe in, but we also have what we believe in and we expect to be respected for what we believe in. When it becomes a big issue for the people of Kenya, they will make a choice."

"We do not want to create a mountain out of a molehill," he said, adding that he prefers to focus his efforts on unemployment and hunger.

Ruto's comments on CNN are similar to those made on the same network in 2018 by outgoing President Uhuru Kenyatta.

“I want to be very clear, I will not engage in a subject that is not of any major importance to the people and Republic of Kenya. This is not Uhuru Kenyatta saying yes or no, this is an issue that the people of Kenya have bestowed upon themselves in a constitution after several years and clearly stated that this is not a subject that they are willing to engage in at this time.

He added that; “In years to come, possibly long after I am president, who knows? Maybe our society will have reached a stage where those are issues people are willing to discuss openly and freely,”.

What's your view on homosexuality in Kenya? Should it be legalized?

The LGBTQIA experience many challenges due to their sexuality,as times goes by they are being accepted in the community
Lifestyle
2 months ago

BOLD Network Africa is the LGBTQ organization founded jointly by Makena Njeri and Michelle Ntalami
Entertainment
2 months ago
WATCH: For the latest videos on entertainment stories

Ruto: I respect LGBTQ's in Kenya