• Harmonize has in the past defended his English saying that as long as people understand him, he doesn’t care whether his English is fluent or not. 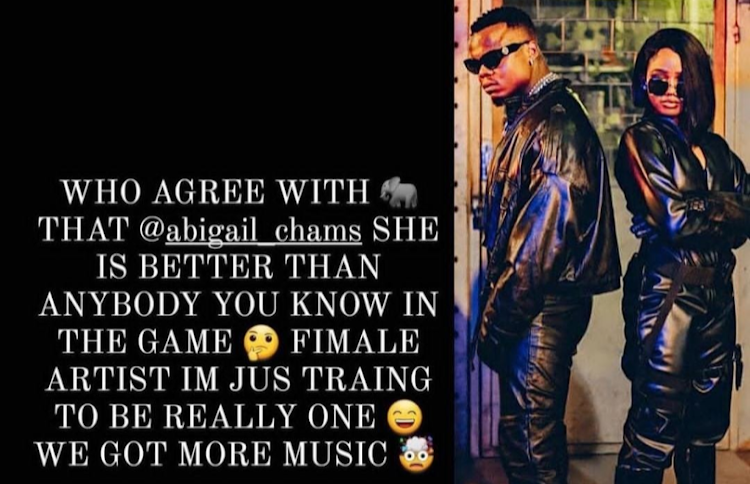 Tanzanian singer Harmonize is receiving a backlash from Netizens after making yet another mistake while communicating in English.

The Konde Music Worldwide CEO was praising a female artiste called Abigail Chams who worked with him recently on a song dubbed 'Closer' when he made some spelling mistakes in his choice of words.

Here is what Konde Boy wrote;

"WHO AGREE WITH Tembo THAT @abigail chams SHE IS BETTER THAN ANYBODY YOU KNOW IN THE GAME FIMALE ARTIST IM JUS TRAING TO BE REALLY ONE WE GOT MORE MUSIC ."

The correct English should have been;

"Who agrees with me that @abigail chams is better than anybody else you know in the game? Female artistes. I am just training her to be the real one. We have more music coming."

This is not the first time he has written broken English in his quest to communicate with a foreign language.

However, Harmonize stated that as long as people understand him, he doesn’t care whether his English is fluent or not.

"I am not a professional when it comes to the English language but when someone speaks I understand them.  English is not our first language, the most important thing is believing in yourself."

"I come from the ghetto, I dropped out of school in class 7, and I have not been to any English course."

A few months ago, Diamond Platnumz also became a topic of discussion after a video of him speaking broken English on Netflix series Young, Famous, and African went viral.

Diamond, in one of the scenes, was chatting with South African singer, Nadai Nakai, when she asked his age.

"How old are you?" Nadia asked.

Diamond responded with broken English saying, "I am just untying my buttons. I am 31st."

In another instance, Diamond Platnumz posted a photo announcing his perfume's entry into the market but the caption had errors.

"I feel incompleted when am on any outfit, without wearing @chibuperfume !..... @chibuperfume by Diamondplatnumz comming out this week!"

"I feel incomplete when am on any outfit, without wearing @chibuperfume !..... @chibuperfume by Diamondplatnumz coming out this week!

Here are comments from Harmonize's fans;

remmy.baby: I'm having a migraine trying to understand what he is saying "fimale".

kaymi_celecious: His English can cause a miscarriage

Most beautiful woman I have ever seen! Harmonize tells Kajala

Harmonize and Kajala met seven years ago and have been close since, with a marriage expected soon
Entertainment
4 months ago
WATCH: For the latest videos on entertainment stories