Noti Flow's new girlfriend asks her to unfollow everyone on IG

•  The new bae has a special demand that Noti Flow agreed to.

Rapper Noti Flow has agreed to a request by her new girlfriend to unfollow people on Instagram.

Four days ago, Natalie Florence introduced us to a new girlfriend, gashing about her newfound love.

In a video of the two lovers on the Coast, Noti Flow revealed "My new gal pretty af tho"

The identity and face of the new girlfriend are still a mystery but we do know the new girl resembles Noti FLow's former lover King Alami.

Noti Flow and King Alami came out as an LGBTQ couple with fans reacting sharply.

This we can tell from the snippets offered in the same video.

Now the new bae has a special request. Noti Flow has been asked to unfollow everyone.

The foto moto singer has obliged and only has 1.7 followers.

"She said I should unfollow everyone so I did. Anything for my girl"

Noti captioned an IG story. to which she followed up with a song about how this love will be the death of her, but I know I'll die happily". 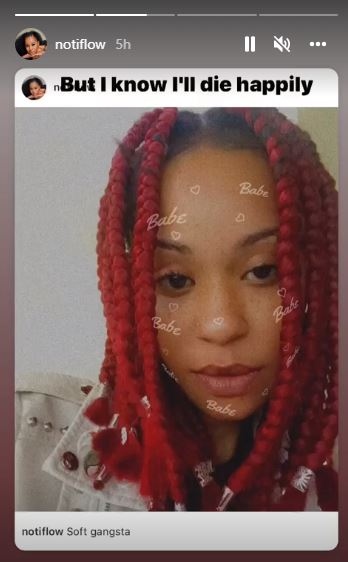 Noti flow told by girlfriend to unfollow everyone

Noti Flow was unceremoniously dumped by King Alami on Instagram when Alami decided to introduce her girlfriend.

Reacting to the terrible news, Noti Flow bashed King Alami as having downgraded her taste.

Florence took shots at King Alami as fans also commented the same.Noti Flow and King Alami have for a long time been in an on-and-off relationship with the two airing their dirty laundry online much to the amusement of netizens.

From escort claims to emotional and physical assault allegations, Alami and Noti have been on one break to another.In July 2021, Noti Flow confessed to being gay.

She also opened up saying that her lesbian lover, King Alami, once turned violent toward her after an argument.She described her ex-girlfriend as a psycho.

Kenyan singer Natalie Florence alias Noti Flow, has taken to social media to announce that she she has a new girlfriend
Entertainment
3 months ago

Noti Flow broke up with King Alami after finding out she is an escort.
Entertainment
5 months ago
WATCH: For the latest videos on entertainment stories

Mustapha opens up on tumultuous relationship