• Wanguku says he cannot pay money to lose energy adding he would rather use the energy to look for money.

• A video of him praying for his nemesis after he lost in the just concluded elections made him go viral. 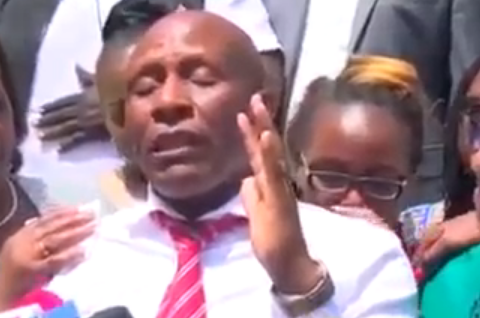 Thuo Mathenge, who was running for the Gubernatorial seat for Nyeri is trending yet again for his remarks on losing weight.

The businessman was on Dr Kingori's show where he said that people should stop wasting money going to the gym just to lose weight.

Speaking on Dr. Kingori the Billionaire Businessman continued to say that he cannot pay money to hit a gym.

" I won't pay money to lose my energy, I use my energy to get money," He insisted.

The aspiring politician who is famously known for his slogan during the political era 'No wanguku' has caught the attention of many Kenyans with his antics.

'No Wanguku' is a Kikuyu name meaning chicken, 'nguku' stands for chicken; the politician who is also a businessman who rears poultry came with a name that people would easily relate him with.

The Nyeri-bred businessman was popular for his escapades, recently he was on an interview with multiple media houses where he prayed for his enemies.

"Lord may your name be praised, I forgive all my enemies for the wrong they have done against me, and in prayer, they join and support me. To believe the only person is 'NO wanguku'," He prayed.

The people who supported him in his running for Governor of Nyeri chanted No wanguku with him as they agreed to everything he said.

The video went viral on social media that had people talking.

Mathenge who went to Chinga boys High school got a scholarship in clinical medicine and he, later on, went ahead and opened several clinics in Nairobi and Kiambu.

However, Mathenge did not win a seat as the Governor of Nyeri after trying his luck three times.

Hard work has paid off for Sportpesa Chief executive officer Ronald Karauri who is now the winner of the Kasarani parliamentary seat.
Politics
1 month ago

How to have a successful business

MP RACE-List of winners so far