He was picked by Azimio's chopper at the airport

• Diamond Platnumz arrived at the airport a few hours before the official ceremony began.

• Diamond Platnumz performed for three minutes at the Azimio La Umoja rally after which Azimio Leader took the podium to address Kenyans. 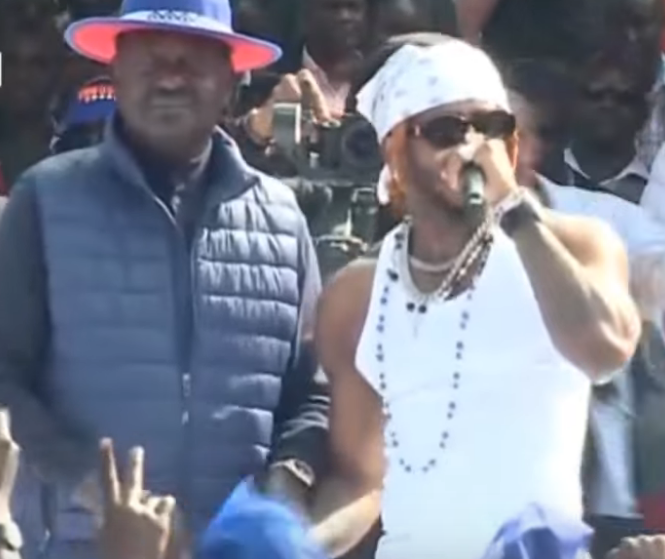 Diamond Platnumz is in the country to perform for the last Azimio La Umoja rally.

The singer flew in a private jet from South Africa with his daughter Tiffah and arrived at Azimio La Umoja One Kenya Alliance’s final political rally under tight security.

He arrived at the airport a few hours before the official ceremony began.

He was picked by Azimio's chopper at the airport.

Diamond first announced he would be in Kenya days ago, but did not mention the purpose of the visit.

Close sources told Mpasho he was coming for the political rally.

Diamond kicked off the performance with his Baba Leo hit, modifying the lyrics to praise Raila Odinga and his running mate Martha Karua.

The superstar performed for three minutes at the Azimio La Umoja rally after which Azimio Leader took the podium to address Kenyans.

Before that, Diamond and Raila shared a moment together with Diamond assuring the ODM party leader of his support for him.

"As the youths, we support you and we believe in your leadership. You are our next president," Diamond said as he shook hands with Raila Odinga.

Diamond was joined on stage by Raila for a short performance of his Wah hit.

Other artists who performed at the rally are Femi One also performed Bendera Ya Kenya, a collaboration between her, Iyaani and Trio Mio.

Diamond used his private jet to travel in Kenya with his daughter Tiffah.
Entertainment
1 week ago

The veteran superstar announced on his social media platforms that he was on his way to Nairobi a few before he boarded his private jet.
Entertainment
1 week ago
WATCH: For the latest videos on entertainment stories