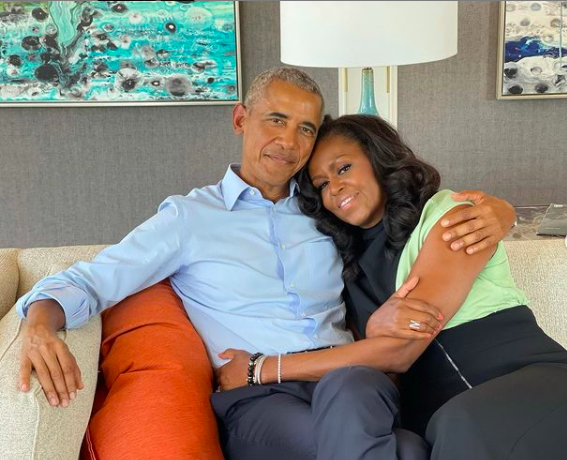 His wife former first lady Michelle Obama took to her social media to celebrate the love of her life in a sweet birthday message.

Michelle described her husband Barrack Obama as her best friend.

She added that he also makes her proud in all she does.

"Happy birthday to my honey! Life with you just keeps getting better every year. You always make me proud. I love you."

The couple will be celebrating 30 years together in October.

Together, Barrack and Michelle have two beautiful daughters.

On their 29th Marriage anniversary last year, the former first lady took to Instagram to share a "how it's going vs. how it's started" snap of the power couple in celebration of the major marriage milestone.

"How it started vs. how it’s going. Happy anniversary, Barack—love you! ❤️😘Photo credit: Chynna Clayton," she captioned the side-by-side photo of her and the former President cuddled up on a couch in their younger years atop a more recent pic of the pair in a similar pose.

Barack also shared that the same present day photo of them on the couch along with another of he and Michelle looking out a window while he held on to his wife's waist.

"Happy anniversary, Miche! Over the past 29 years, I've loved watching the world get to know you not just as a daughter of the South Side, but as a mother, lawyer, executive, author, First Lady, and my best friend. I can’t imagine life without you," he wrote.

“Our country is paralyzed, not by fear, but by a gun lobby and a political party that have shown no willingness to ac
Politics
2 months ago

Obama is narrator in Netflix show about Tsavo

Former American president Barack Obama stars in a Netflix five-part series that invites viewers to celebrate and discover the power of our planet’s ...
Politics
4 months ago

'Why can’t I have a career & family?' Nadia Mukami asks