Owago is currently in the US

• Owago Onyiro has narrated his near-death experience after being hospitalized.

• The comedian who is currently based in Texas, United States of America did not disclose what he is ailing from. 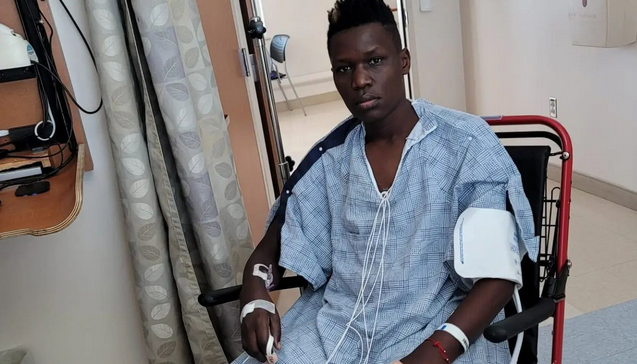 Owago in a post on his social media post said that the past four days have been hectic following the hospitalization.

The comedian explained that he fainted and passed out for almost four hours before he was resuscitated by doctors.

The comedian who is currently based in Texas, United States of America did not disclose what he is ailing from.

"It has been hectic for me the past four days. Fainted and passed out for almost four hours," he said.

"Saw real death and came back. Trust me I am not dying anytime soon again in Jesus name. Thank you, Lord, for making me live again."

He went on to share a photo captured when he had passed out with a caption that says;

"Here I was gone forever. Didn't know anything for four hours.

Thank you Lord for saving my life."

Onyiro was one of the comedians who decided to start small businesses as an alternative source of income when the COVID-19 hit the country.

While speaking to Daniel Ndambuki in the Churchill show Journey Series, the comedian revealed that it only took one photo of his homemade fish for opportunities to start opening up for him.

"That time I was not doing anything so I decided to cook fish just like any other person and shared a video of myself preparing the fish on my Instagram.

What followed were requests from my followers and fans asking me to deliver the same to them and the following day I delivered two orders. I saw a business opportunity and decided to run with it and the rest is history," he said.

"We don't want the youths to be the ones being used to conduct violence at any point. So any person found inciting violence will be dealt with ...
Politics
5 months ago

Obinna bribed Jalas with sh 50,000 to help him get the job
Entertainment
5 months ago

These Are The Plans For Your Favorite Kenyan Celebrities This Valentine

The big reveal! Kamene Goro gets a co-host on Kiss FM

'I am irreplaceable!' Jalang'o after leaving Kiss