The businessman revealed this news on his social media

• Jimal had been working over the weekend and felt unwell while leaving the office.

• The father of two posted an image of himself on his hospital bed. 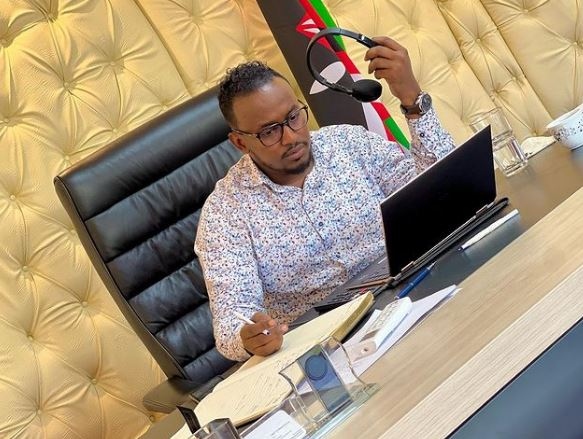 Early this morning, prominent businessman Jimal Rohosafi revealed that he had been hospitalized.

Jimal used his popular Instagram page to reveal this information to his millions of followers. His post caption explained that he had left his workplace feeling unwell. (Most likely he was working on Sunday)

"I hate hospitals. Just a second after leaving the office, I felt out of place," he wrote with the accompanying photo showing him laying in a hospital bed with a drip on his wrist.

The Matatu boss didn't however reveal what the doctor's prognosis had been. One can only hope that he will recover quickly and be up to his old self soon enough.

Just yesterday, Jimal had posted an image of himself posing on his fabulous White Range Rover where he advised ladies on the need to work for their success and not sleep for it.

"Dear Ladies, Work hard such that when you'll be in need of Pizza, You'll Open your Wallet, Not Your Legs 🤞🏼"

Kenyans who read the comment had different opinions on it with some agreeing with him while others thought he was taking shots at an ex in his past, most likely Amber Ray.

leila.hassaan Oh rather close their legs to married men😂

luxe.collections_kenya Shots fired😂 Jimal will not be replaced in silence 😂😂

mum.dollar Aki u jst need a woman ur thinking too much

Let's not forget that Amber's love life has been going very well this past few weeks with her new man Kennedy hinting that they might be walking down the aisle very soon.

But who knows for sure?!

Amber Ray's ex Jimal, comes clean on whether he is dating his employee

Joe Muchiri asked Jamal; "What if you are the hot spot?" to which Jamal responded saying cheating is allowed in men.
Entertainment
1 month ago
WATCH: For the latest videos on entertainment stories