DP William Ruto was solo for the 2022 presidential debate at CUEA Tuesday night,

• Ruto said his position is to support the Head of State. 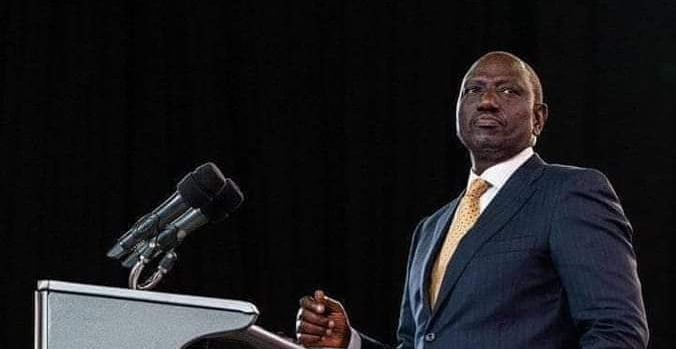 Tuesday, July 26th will forever remain etched in the memories of many Kenyans.

This was debate day for Presidential candidates hoping to become Kenya's 5th President.

Four hopefuls had made it to this point namely; David Waihiga, Raila Odinga, William Ruto, and George Wajackoya.

Only David Waihiga and William Ruto took to the podium to address Kenyans.

speaking during the 2022 presidential debate at the Catholic University for Eastern Africa (CUEA) on Tuesday night, William Ruto gave his three-point plan that includes managing the country's 8 trillion shilling debt.

Ruto said if elected the Head of State at the August polls.

His Kenya Kwanza government will first halt all borrowing immediately, then put a stop to projects that are not in the government budget, and finally find ways of increasing revenue.

“I believe it is reckless for anybody to say we cannot pay our debts. I believe that we have what it takes to pay our debts. We have a plan as Kenya Kwanza on how to manage debt. We will first slow down on borrowing,” he said.

“We will put brakes on unbudgeted projects; in fact, that is the biggest source of our problem. Projects that are not within the budget, so that we cannot keep our fiscal deficit at what we have committed; 5% or 5.9%.”

There were also hilarious moments between him and moderator Yvonne Okwara and Eric Latiff.

Even KPLC was trolled after the lights disappeared.

The memes and comments are below:

Ruto right now after Hussein leaked the wrong paper to him. Enough is enough🤣🤣🤣🤣🤣 pic.twitter.com/jW4XnNbscb

William Ruto, a presidential candidate for the UDA, claims that Raila Odinga, the leader of the Azimio la Umoja One Kenya coalition
Politics
2 weeks ago

• A calm and collected Ruto said he had an explicit plan on how he would reduce the cost of living should he win the August 9 general election. • Ask ...
Politics
2 weeks ago

Wajackoyah had just arrived at the debate venue
Politics
2 weeks ago
WATCH: For the latest videos on entertainment stories