• Diana Marua blames Bahati for their lack of physical intimacy.

• A while back Bahati complained that he was not getting enough intimacy from his wife. 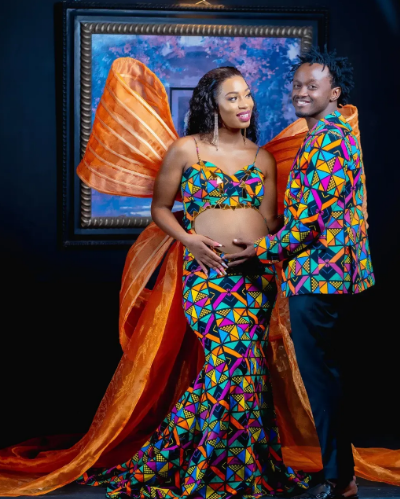 A while back Bahati complained that he was not getting enough physical intimacy from his wife Diana Marua.

When Nicholas Kioko asked why she was failing in that sector, Diana blamed the Mathare MP aspirant's busy campaign schedule which sees him come home in the wee hours of the morning hence making it impossible.

Diana would go on to say that it reached a point where her hubby wanted to be intimate on a daily basis and his musician girlfriend had to put a stop to it for at least a week.

The heavily expectant mother of two said, "I think we only went for one week without physical intimacy. Mheshimiwa wants it daily and doesn't give me room to rest, so I decided to give him a one-week rest and it became a fight."

Diana bemoaned that her husband was used to coming home as late as 2am saying she rarely sees him at home now unlike when she used to feel Bahati was too much into her space, she now wants him more.

"Sikuhizi hata hatuonani sana sasa hata nam miss. Kitu inanibore for now ni I don't get to see him a lot now I want him more in my space because I rarely get to see him because of course I understand he's out there looking for votes to the next Mathare MP and I wish him the best," added Diana.

How does she feel as she expects to become a mom for the third time?

"The feeling is amazing I think right now I've already embraced the situation that I'm gonna be now mommy to baby number three, I am excited and I cannot wait to meet my angel."

Diana together with Bahati did a baby bump reveal via a song, and said that the song was a prayer for their unborn child.

"For me, I wanted to make it special also for me and my kids so that even after I give birth to this baby this message will forever remain in his or her heart. It was more of a prayer for my baby," she said.

The 'mubaba' hitmaker says when she revealed the news to Bahati, he was shocked for a second but was happy about it saying it was what he wanted only that it came sooner than he expected.

Bahati-Why I married an older woman

Bahati said he matured early due to lack of parental love.
Entertainment
3 weeks ago

Bahati upset at Diana for not wanting to get pregnant again

Diana Marua has described how she suspected she was pregnant back in February.
Entertainment
3 weeks ago

Bahati becomes only 2nd Kenyan artiste to break this record