• Wakadinali was among those under consideration. 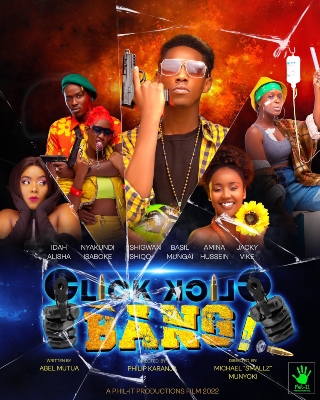 Had the song 'Geri Inengi' been used in the film Click Click Bang, Wakadinali would have been paid sh450,000.

Abel Mutua has said that directors struggle to get permission to use a song. Rapper Khaligraph Jones gave his entire music catalogue for free for use in the Kenyan film Click Click Bang.

"Khaligraph came and told us ni sawa. I have seen what you guys are working on and where I can offer my support is with my music. Do you know he gave us his entire music catalogue and this guy has close to 500 songs?"

Khaligraph told them to go through the entire catalogue and chose what fits the film production.

"Alafu manze it was so helpful coz Khaligraph is not signed. Blue Inc ni yake. In fact, last year the other people who gave us music were Sauti Sol, God Bless them so much. Sauti Sol told us, 'Take our music.'"

But there was a slight challenge to this offer;

"They were signed by Universal and before they were signed under Penya so we had a short window to use the music. But for Khaligraph, he owns the entire music catalogue. Same with Hart The Band. They came and told us niaje, look at our music and use the one you want."

Abel Mutua also admitted that they had considered using Wakadinali's popular song 'Geri Inengi' but it proved to be an expensive idea.

"Of the most expensive element in film production is music. Let me tell you there is nothing more expensive. The moment you watch a movie in Hollywood and hear a song you know, believe me, money has been poured. You might find that in the total budget of 100million dollars, half of that has gone to securing music rights. It's super expensive."

He cited a local example to prove his point

"I called Wakadinali, coz I wanted their song for Click Click Bang. They have a massive banger 'Geri Inengi' but Wakadinali are under management. The thing with management lazima they follow rules. So they did the math and found for us to get 30 seconds of 'Geri Inengi' for our film, would have cost us not less than 450k. It is actually true it cost that much to have a 30-second clip on my film. So imagine Hollywood which uses almost 10 popular songs."

This was when Khaligraph came through for the film directors.

Click Click Bang movie revolves around Kev, a super talented footballer and orphan with a sick sister to take care of.
Entertainment
3 weeks ago
WATCH: For the latest videos on entertainment stories