• The former boxer made the statement on his Hotboxin' with Mike Tyson podcast.

• Tyson revealed that at times, he feels as though his fate is sealed. 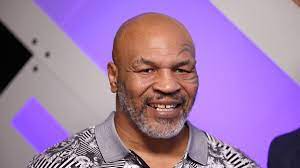 Legendary boxer Mike Tyson has left fans worried after revealing his death is near.

The legendary 56-year-old boxer referenced some of his body parts, which he says he feels are deteriorating.

The former heavyweight boxing champion hosted therapist Sean McFarland, a specialist in trauma and addiction, on his "Hotboxin' with Mike Tyson" podcast and told him he believes his expiration date is near.

Tyson says he's noticed parts of his body recently and is worried about how much longer he has on this earth.

"We're all gonna die one day of course," said Tyson. "Then, when I look in the mirror, I see those little spots on my face, I say, 'Wow. That means my expiration date is coming close, really soon."

Tyson continued to be introspective when discussing money, stating he doesn't believe it brings them happiness and security that many associates with it.

"Money doesn't mean ish to me."

"I always tell people, they think money's gonna make them happy, they've never had money before, when you have a lot of money, you can't expect nobody to love you. How am I gonna confess my love to you when you have 500 billion dollars?"

"The false sense of security. You believe nothing can happen. You don't believe the banks could collapse."

Tyson finished the interview by saying,

"You believe that you're invincible when you have a lot of money, which isn't true. That's why I always say money is a false sense of security."

Tyson was in April at the center of a viral video storm where he was filmed throwing punches at an overzealous fan on a flight.

Maina Olwenya's family refutes claims that he had been murdered.
Entertainment
4 weeks ago

A cup of tea and piles of sweet potatoes she was taking were found next to her.
Crime
1 month ago
WATCH: For the latest videos on entertainment stories