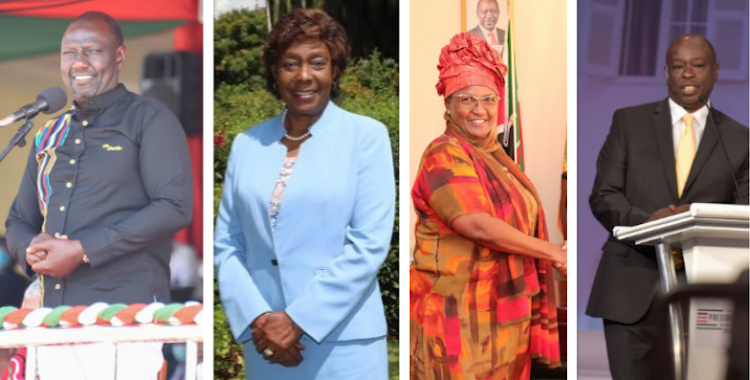 During the 2022 Deputy Presidential debate held at the Catholic University of Eastern Africa, Kenya Kwanza running mate Rigathi Gachagua told that he does not partake of alcohol.

The admission adds to the list of famous Kenyans who don't drink alcohol.

1. Naomi Shaban - Shaban is a Dental Surgeon by profession, and first ventured into politics in 2001 when a by-election was called in Taita Taveta Constituency following the resignation of Basil Criticos.

2. Charity Ngilu - The Kitui Governor will not be defending her seat int he forthcoming General election. Ngilu unsuccessfully vied to be President of the Republic of Kenya in 1997. She served as Minister for Health from 2003 until 2007 and Minister of Water and Irrigation from April 2008 to 2013.

3. William Ruto - The Deputy President is the front runner for the Kenya Kwanza coalition.

4. Rigathi Gachagua -  He is the running mate of DP William Ruto. During the Deputy Presidential debate  Tuesday July 19 that he does not drink.

5. Anyang Nyongo - The Kisumu Governor currently keeps a low profile as opposed to his rormer fiery self back when he was actively involved in ODM politics. He is a teetotaler.

6 .Abdulswammad Sharif Nassir - The Mvita M)p isrunning for the Mombasa county Governor seat come August. He is a fitness enthusiast who keep s away from alcohol.

7. Najib Balala -  The Tourism CS just like some of his peers has been keeping away from the political scene. Balala is the longest-serving minister having served 25 years in service, with 17 years as a Minister, of which 12 years as the Minister of Tourism.

8. Mishi Mboko -  Mishi is a Member of Parliament representing Likoni Constituency. She trounced former MP Masudi Mwahima in the 2017 elections.

9. Nana Gecaga - The niece to P{resident Uhuru has been on a 23 year sobriety journey.

10. Jimmy Wanjigi  - The aspiring politician  regularly posts himself drinking tea even with guests.

11. Comedian YY - The rib cracking comedian once told how his fathers battle with alcoholism convinced him to keep away from alcohol.

Nana, who has been vocal about how alcoholism ruined her life, says she is happy about herself as she has remained committed to sobriety.
Politics
2 months ago

Terryanne Chebet responds to being a heavy drinker

Terryanne said alcohol is not supposed to be abused but instead people should just enjoy drinking.
Entertainment
3 months ago
WATCH: For the latest videos on entertainment stories

How Mirema Drive shooting led to fallout in crime syndicate