'I love you!': Frankie Just Gymit apologizes to Corazon Kwamboka

• Days after revealing that lack of a father figure played a part in his failed relationships with Maureen and Corazon Kwamboka, Frankie Just Gymit has finally made a public apology.

• To Corazon, he professed to loving her for a very long time adding that he still does as he thanked her for allowing her to co-parent with him. 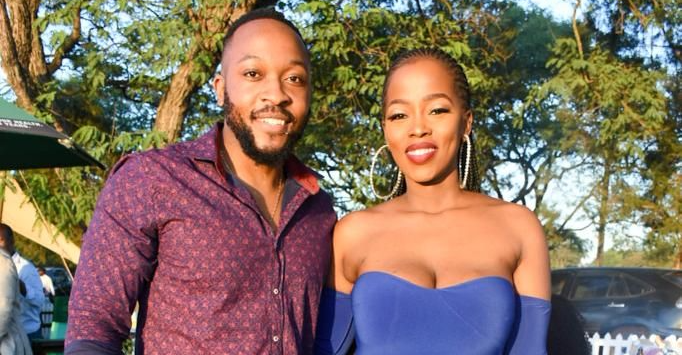 Days after revealing that lack of a father figure played a part in his failed relationships with Maureen and Corazon Kwamboka, Frankie Just Gymit has finally made a public apology.

Frankie did it during an interview with Lynn Ngugi where he owned up to his mistakes and apologized for the hurt he caused his exes, especially, Corazon Kwamboka.

After the interview he was asked to face the cameras and send a heartfelt message to both Maureen and Corazon.

To Corazon, he professed to loving her for a very long time adding that he still does as he thanked her for allowing her to co-parent with him.

"It is unfortunate that things didn't work out like they were supposed to and we went through a lot after the breakup and I just kept spiraling down that I ended up losing myself. One thing I value so much with you is that you still allow me that access to the kids." He said.

For the situation that happened before I fully apologize, that was not not something that I should have mentioned. I hope you feel better and I love you!"

I think I would just say we broke each other's hearts we've both gone through a couple of things that I feel I was done wrong in and she feels I did her wrong in.

Speaking to Maureen, Frankie apologized to her for 'cutting her off' and confessed his role in not treating her better as the mother of his kids.

He said, "Maureen I am definitely sorry for putting you through what you went through in terms of cutting you off. In that situation we could have had a much better bond and understanding. I should have treated you like the mother of my kids rather than treating you as just like my girlfriend."

He reminded her that she is still special to him and their kids and that she will always be valued.

Frankie also addressed rumors that he is broke, saying he has never used women he has been with to finance his lifestyle.

"I don't understand why people think that. When I got into my first relationship we were like on the same level financially and even for us to do our couple thing, it was a way for us to generate income for ourselves and also our children." Frankie said.

Corazon Kwamboka hints she is in a new relationship

"I am an athlete who runs well under pressure. So I am looking forward to getting better in Oregon, because now everybody who is an athlete will be ...
Exclusives
1 month ago