Dogo B Nghoye is a professional dancer cyberbullied for his tattoos

• Dogo B Nghoye said he does not take online trolls kindly. 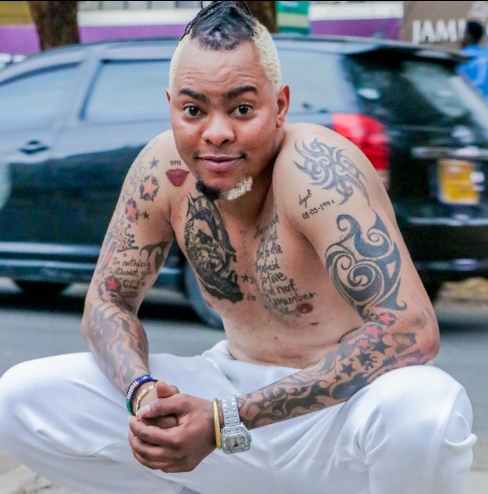 Dogo B Nghoye is a professional dancer who is very popular on Kenyan TikTok. The man recently spoke to YouTuber Nicholas Kioko about life in the limelight.

Dogo opened up about being cyberbullied for his numerous tattoos.

"I'm inspired by things I like, if there are things you like, I love tattoos so much, before I ever knew people use ink, I used to have my tattoos done with a needle. You know the needles for making clothes so I use 3 needles tied together then drop ink in then I dunga dunga my skin. I just persevere the pain. Then when I came to Kenya and saw people using ink, I could not believe it."

Dogo has challenges dating because of the ink all over his body.

"I was once dumped by a girl after her mother told me I am Illuminati because of all my tattoos."

Dogo is originally from Mwanza, Tanzania with the entertainer saying that dancing is his profession.

"I was born with the gift for dancing. kuna talent ya kuzaliwa na kujifunza. Mimi yangu ni ya kuzaliwa. I came to Kenya in 2015."

His fame has seen him land good gigs.

"I became famous in 2015. There is one video I did that got the attention of Safaricom. I posted it on Facebook, and it went viral. I have also worked with Awilo Longomba, and Prince Indah. They have trended."

Cyberbullying is a daily occurrence for Dogo that he has gotten used to. Dogo deals with bullies harshly, with no remorse.

"I get a lot of negative comments on Tiktok for my many tattoos. And I don't keep quiet. I'm that type of person that responds to trolls, nakurudishia sana. If you write negative comments, ah I will hit back many of the bad comments are people telling me I look gay, or I look like a woman. First of all, in this life bro, don't have more friends than enemies. My advice to you."

"I'm not the type of person you tell something bad and it affects my mental health. I am bulletproof, yaani if you throw comments at me, hainiingiangi."

He insisted he is not gay.

"So you can go ahead and tell me all those negativity ati I'm this or that, it is okay. Yes, I'm okay with that."

How was it working with Pozee?

"I dance for Willy Paul, lakini si ati nimeajiriwa, mi kitu imeniajiri ni Safaricom. I don't have a management team to say that I am hired by so and so. Kwa Pozee ni ile tulikutana na Zabuu zikaingiliana akasema ah gutunaweza work pamoja . I was in the video for the song called Ogopa so we went and shot that video tuka kaa pale. One thing about me that I liked so much about Willy is Willy is a people person and then  he loves jokes, so mi napenda watu wanapenda jokes so we got along well so we work together kama kuna job twende shoot hivo tunaenda hivyo."

Is there any musician he would never work with?

"In Kenya? No, I'm not like that, sina ubaguzi. Ati sikupendi? Aie hiyo sina. I dance to music that has vibes, ngoma yeney inaingiliana if it's catchy I dance to it no matter the artiste. sichagui ati hii ni ya nani hapana."

Professional dancing is lucrative something that he admitted to.

"I am paid by musicians to trend their music on Tiktok through a dance challenge. I am paid from sh10,000 to trend the song."

Miss P can object to this application by Willy Paul. She has until end of July to do so.
Exclusives
3 months ago

Willy Paul plans to hold a solo concert in Kenya.
Entertainment
4 months ago
WATCH: For the latest videos on entertainment stories

I am a lonely man-Willy Paul confesses