In 2015, CNN's US broadcast would regret their words when they described Kenya as a "hotbed of terror." 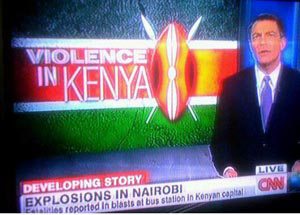 Kenyans will not spare the world from any consequences if anything misleading is said about the 254.

This has come to light once again on Thursday July 7, 2022, when Fox News broadcast want viral.

We look at the times Kenyans have blasted the world for putting out misleading information about our country.

A TV presenter Emily Compagno claimed pregnant women aren’t allowed to leave home and thus have no right to vote, prompting Kenyans to call the claim false and demand an apology.

During a July 5 appearance on Fox News late-night “comedy” show Gutfeld!, Compagno took issue with celebrities wading into political issues and allegedly trying to “cancel” the Fourth of July.

She chastised those who’ve complained that American women are losing their rights by noting that it pales in comparison to what women in other countries face.

“The insularity of these celebrities is so asinine to me! It is so nauseating. These comments are totally delusional,” the Outnumbered co-host fumed.

Adding: “We have less voting rights? What about in Kenya where pregnant women can’t leave the house so they absolutely have no constructive right to vote?”

In 2012, Kenyans on Twitter blasted Korea Air for an advertisement where they encouraged tourists to visit Kenya to see the country’s “primitive energy”.

KOT took to social media to pen their anger  over the racist remarks prompting the airline to pull down the advert and issue an apology.

3.In 2014, Nima Elbagir from CNN filed her story titled "Kenyans Armed and Ready to Vote."

In it, a "Kikuyu militia group" show their powdered faces and arms conducting drills on-camera with "home-made guns & machetes."

#SomeoneTellCNN trended, with protests about the story.

New York Times was blasted for publishing a graphic photo of victims in the Nairobi hotel complex attack, in which 14 people died.

The photo, which was distributed by the Associated Press news agency, showed two victims with multiple bullet wounds slumped over their tables in a restaurant.

Including the photo, which did not come with a graphic image warning, was dubbed “distasteful, disgusting and deplorable”.

NYT International Editor Michael Slackman was tagged online to explain to Kenyans why his publication published graphic images of dead Kenyans following the bombing of a local hotel in Westlands.

Kenyans demanded a formal apology and strong editorial consideration to withdraw the image.

In 2012, David McKenzie on CNN did  a story about a grenade attack in Nairobi calling Kenya a hotbed of terror.

Kenyans took to social media to condemn the media house.

David MackKenzie apologized after much pressure.

"Our reporting on last night was accurate, the banner used in bulletin was not. I contacted CNN for future bulletins. Apologies to all." He wrote via Twitter.

The matatu was ferrying unknown number passengers to Mandera Town when it ran over an Improvised Explosive Devise.
Crime
8 months ago

Emily Compagno has come under fire for her claim that pregnant women in Kenya never leave the house.
Entertainment
2 months ago

Woman falls from 5th floor of a Kilimani apartment while cleaning

Kilimani police boss Muturi Mbogo said the woman slid as she cleaned the premises along Ndemi Road on Tuesday
Lifestyle
2 months ago
WATCH: For the latest videos on entertainment stories