• Gloria Kyallo said she rarely disagree with her sisters but the two (Mercy and Betty) always have issues.

• Betty also promised that she will address the incidence that led to the breakup story with her ex-lover Nick Ndeda. 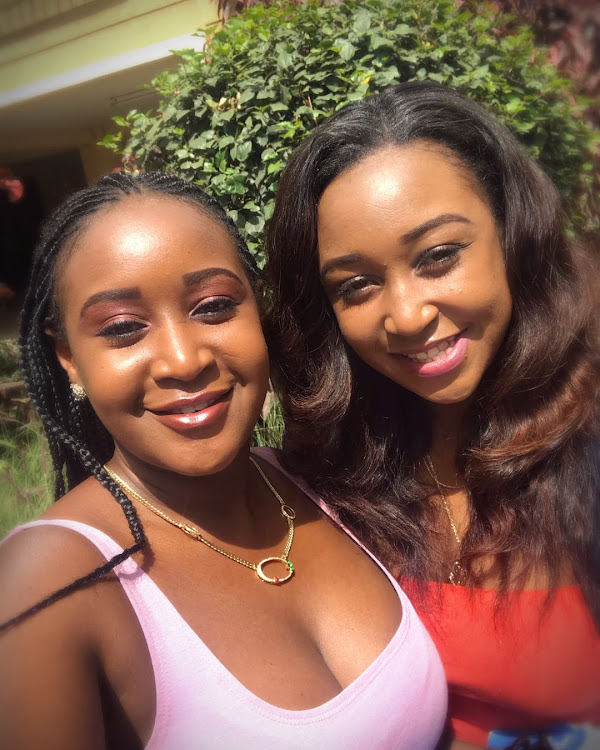 The Kyallo sisters, Betty, Mercy and Gloria were yesterday interviewed by Mwende Macharia on radio and they spoke about sibling rivalry.

The three sisters are not perfect and they have different opinions on how they do their things.

Mwende asked if they fight or even disagree.

The youngest, Gloria Kyallo said she rarely disagrees with her sisters but the two (Mercy and Betty) always have issues.

"The last one week has been the most peaceful," Gloria said. Adding that most of the time, they disagree because one of them has taken the other's clothes.

According to Betty, Mercy always takes her clothes without borrowing.

"I am in the house and I think of the certain dress I have not seen for a while. Then, I check Mercy's IG, and I see a photo of her wearing my clothes," she said.

Mercy defended herself by saying;

"When you borrow Betty's clothes, she will never give you so I take and return."

The two elder sisters also said they have never fought over a man.

"Our choice of men are different," Mercy said.

"I don't have a type. If you look at my men since a long time ago, they are the same. The only thing that stands out is that they have a brain and are very intelligent. They could be bad looking but they are intelligent."

Mercy added that Betty looks for something else in the men she dates.

Betty got offended and asked her sister Mercy to apologize which she did.

Mwende then said most of the men Betty has dated were dark and handsome.

"Not all of them are dark and handsome. I had Somalibae who was so light," Betty said.

Betty also promised that she will address the incident that led to the breakup story with her ex-lover Nick Ndeda.

"We have a full episode about what happened as we have fans who had invested their time in our love story. It was as good as it lasted."

During the interview, Mercy insisted that women should not stay with a man who cannot take care of them.

"I take care of myself, I buy myself everything I want. I tell my sisters to look for a man who takes care of you and you are okay and then you can be a superstar," Mercy said.

"Let men take care of you and let him open the door for you. Sit down and wait for him to take care of you. My sister Betty doesn't know how to be loved. When you become the boss lady all the time, you are paying bills and all that. She pays bills all the time."

Betty said she has stopped that behaviour and is now being taken care of.

Watch: Betty Kyallo will never reveal her lovers in public

Betty Kyallo and her sisters will share a key life story that they've never opened up about before in their reality show
Entertainment
4 weeks ago
WATCH: For the latest videos on entertainment stories