Nyashinski introduces the most important men in his life

• Nyashinski introduced his 'boyz club' which is made up of 8 gentlemen.

• According to Nyash, everyone needs a group of close friends in their corner, people who help steer us in the right direction. 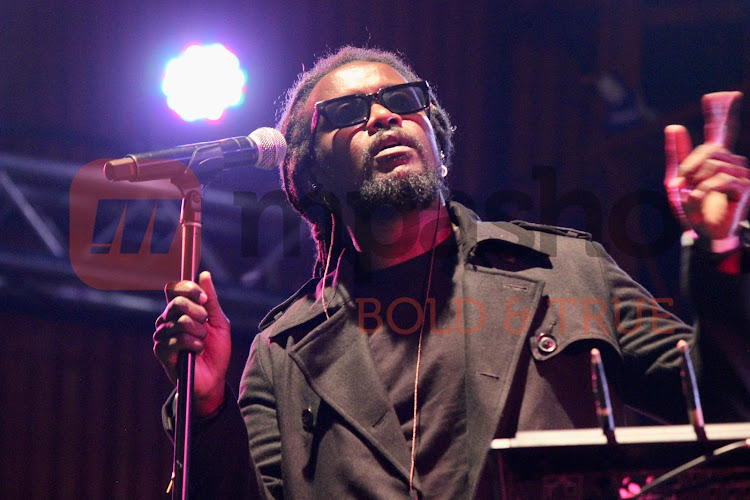 Nyashinski at the rehearsal showcase ahead of Shin City Concert at the Carnivore Grounds on April 16, 2022.
Image: SAIDI ABDALLAH

Through his socials, The 'Marathon runner' hit maker posted a photo of 7 of his closest boys whom he referred to as his brothers, family, kamati, and tribe.

According to Nyash, everyone needs a group of close friends in their corner, people who help steer them in the right direction.

From the photo, it looks like the boys were enjoying their getaway, away from Nairobi madness.

He wrote, Call it a family, tribe, boys club, clan, kamukunji, kamati, mbogi: Whatever you brand it, we all need one. These right here are my brothers👊Let's all take a minute to tag and appreciate the people in our corner."

Meet the members of Nyashinski's boys club below;

Below are some of the reactions the photo elicited with some stating that presidential candidate, Professor Wajackoyah had approved the photo.

Into Shar: Yani campaign team ya Wajackoyah the 5th walimeet without telling the masses!

Most I Moseti: Blood...family first.

Three years ago, Nameless introduced his boyz club which consisted of; Sauti Sol’s Bien, Nyashinski himself, Naiboi, and Bigpin. All are musicians.

Introducing his squad, Nameless wrote at the time,

“So I took this very unclear selfie for a reason… So we have a code name for feeling kind Of depressed or down, it’s called “Dustbin” so if one of the boys Hollas to the group that he is in the “dustbin” then we know he is not been in a good place and the rest of the boys find time ASAP to meet and just bond with the one in the dustbin till we get him out..”

Other celebrities who have introduced their boys club include the late Bob Collymore and Jalang'o.

Celebrity crush? Avril opens up on her love for Nyashinski

'I love Nyashinski,' Avril opens up
Entertainment
1 month ago