• Former 'Machachari' actor Govi trended a few months ago after he announced he had dated older women.

• Govi said being exposed to adult life at a young age made him mature early. 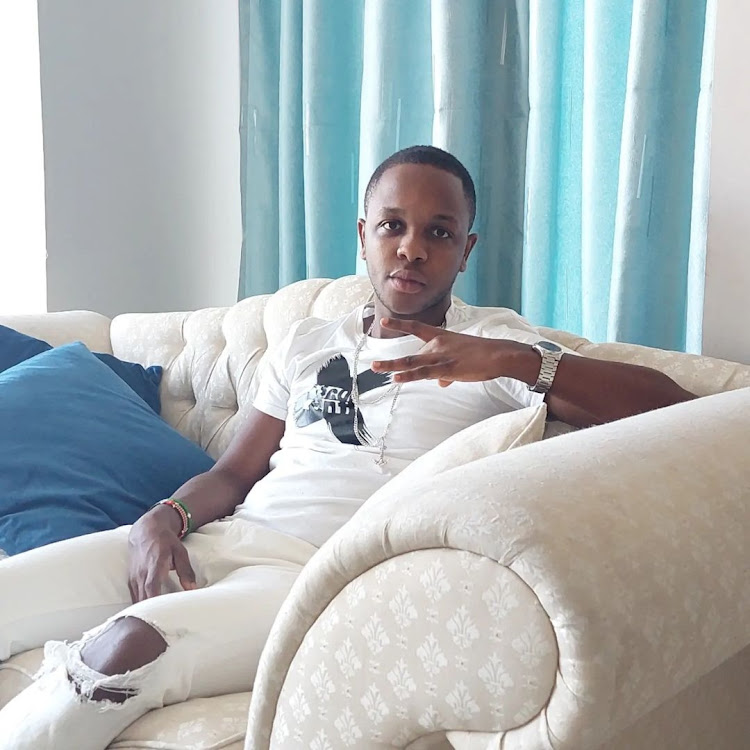 The actor in an interview with Mpasho.co.ke said love is not about the age but about two people who want to be happy.

"I am open to dating any woman but my preference is older, which could mean one day older, two months or even 50 years older," he said.

Govi said he has ever dated one who was four years older than him.

"I think that is the oldest I have gone. That is my limit. Four years and below is my preference."

He said being exposed to adult life at a young age made him mature early.

"If you grow up somewhere seeing older people behaving in a certain way, you might end up liking that," he said.

Well, the topic had a mixed reaction from fans with many defending the actor for his decision.

However, some claimed he wants to be funded by older women.

Here are some reactions to the story;

Diana Rose: Why do people assume he's after money and why do you judge when he's a boy when girls are dating fossils out here.

Patrick W Mwangi: Not poor parenting, laziness, Shortcut for success, he used or he is a celebrity who wants to maintain his status and lifestyle... He will end up wasting his life...Baha is doing something in his life...Like guardian Angel to maintain his celebrity status and lifestyle he had to clinch on older women, most guys who end up with sugar mummy get wasted in life... A man is not a woman.

Mwaguzo Hassan: He meant older and not old I think there is a difference here.

Maingy Hanini: Those guys who date old women are always lazy, they don't like responsibilities and they never grow up mentally.. Always want to be treated like babies even in their late 50s.

Lisamila Moz: Don't be quick to vilify him coz girls his age born in 2000s know nothing abt relationships or how to keep a man yet date older, 'well-oiled' guys. An older woman will treat you like a son and f**& you like she owns you and still pay you for IT.

Wycliffe Ondari: Mothers, please hug your children and show them parental love so that they don't go looking for it in your agemates.

Margaret Ngugi: Talks of a lazy boy....a real man will hustle marry his agemate, get children, struggle in Life and finally make it with honour.

Unnyz Unnyq: He shouldn't coat his immorality with respect and understanding because they don't come with age but with someone's personality.

Emmah Akoth: A lot of these older women are comfortable around these younger men, they allow themselves to let down their guard.

Everline Shisia: Understand what! Look for a younger girl and take up your responsibility of raising your family. Most young guys are going for older women to be taken care of.

Brighter Cornelius: Who cursed this generation is he or she alive. Pliizzzzzz come and release us from this curse it's getting wars we can't keep it anymore.

Diana Johns: Halafu tomorrow my boy brings me the daughter-in-law of my age, we are finished. parents let us go deeper into prayer this is more than insane.

Anne Assure: The youth are losing it !!!!! really???? We need God's intervention and where will the young girls go if old woman has taken over young men.

Bakhita Josephine: That is why we say the young generation is completely lost. Hawataki kuchoka, looking for sponsors to support them instead of a man to works hard and raise a good family by himself. Mungu a tusaidie kwa kweli.

Wanjiku Wa Mwangi: You do you Govi, people be judging as if they be saints...if that's where you find peace go for it.

Aela Omogi: This is how young boys try to prove they are men.By impressing the public that they can handle and take care of older women.

Emmy Silayi: Yaani Govi has started dating leave alone doing it with older women? No wonder his brother Bahati is a father-to-be already!

Makaveli Brown: Once you try an older woman there is no turning back. They used to tell us when we were young boys that if you sleep with a woman older than you, you get burnt. It was a lie that was meant to deter us from experiencing the height of pleasure; the epitome of sweetness. Try these things when you are still alive. Society pressure should not stop you.

Govi's dad lives in the US and the actor will be visiting him for the first time.
Exclusives
1 week ago

Govi has opened up about whether he would date an older woman
Entertainment
2 months ago
WATCH: For the latest videos on entertainment stories