Terence Creative apologizes after viral video of him eating while driving

• Terence was driving as he ate Ugali and nyama choma from a bowl and jamming to Ali Kiba's song 'Usiniseme'.

• Fans told the comedian that he is a celebrity and as a role model he was teaching young people wrong values and it would be bad if they copied him. 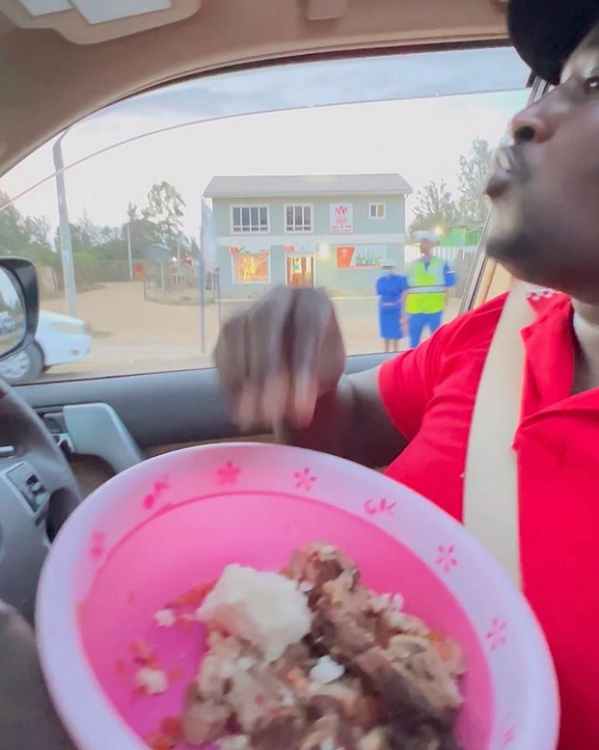 Comedian Terence has been forced to apologize to his fans after sharing a reckless video on his various social media platforms.

In the video, Terence was driving as he ate Ugali and nyama choma from a bowl and jamming to Ali Kiba's song 'Usiniseme'.

The father of three was put on the spot by most of his followers for the post.

Those who commented tagged NTSA asking him to pull down the video as it was in bad taste.

Fans told the comedian that he is a celebrity and as a role model he was teaching young people wrong values and it would be bad if they copied him.

Caro aus tiff wrote; "This is very irresponsible, putting other motorists at risk. Terence as a celebrity with so many young people following you, this is not a good example."

Another fan wrote; "Bro park by the roadside, eat then proceed with the journey. Whatever you are doing is both unhygienic and dangerous."

Allan Kenya told Terence that as a celebrity, he ought to be advocating for safe driving.

"Although it is content creation, safety first. Attention on the roads is critical."

Other fans also stated that he was putting the lives of the people he was carrying and other road users in danger.

Well, the comedian has since pulled down the video and asked his fans to forgive him. Terence stated that no minors were on board during the shooting and that no one was harmed.

He promised to be an advocate for road safety.

"Following my previous post that I had shared of me eating and driving, I wish to ask for your apology and ask you not to emulate this behavior as it may put you to danger and risk the life of the people on board, my apologies for that and keep safe, I promise to be an ambassador and advocate of safe driving as indicated by the laws of Kenya and those of NTSA," he wrote.

"Further I wish to clarify no minors were on board during this shooting and no one was harmed, we were in a snarl-up driving at 30kpm,however, this doesn’t justify my act. Once again I apologize for that stunt .#SafiriSalamaFikaSalama."

Terence Creative has opened up about his wife, Milly Chebby, losing a pregnancy, a few years ago.
Entertainment
1 month ago

Terence Creative and Milly Chebby speak about having a white wedding

Terence said in their journey they have made friends and cut some friends  along the way.
Entertainment
1 month ago
WATCH: For the latest videos on entertainment stories