• Keziah Kariuki and Mzee Kiengei broke up over different issues among them infidelity.

• Keziah has a daughter she co-parents with her ex-husband Kiengei. 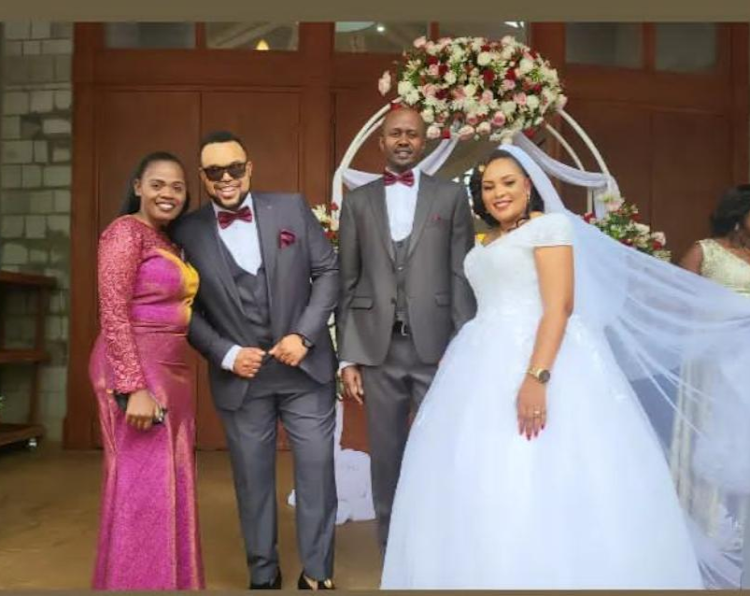 Betty Bayo's and Keziah with her husband
Image: courtesy

Mzee Kiengei's wife and ex-Kameme FM presenter Keziah Kariuki has revealed that she has an adopted daughter.

She says she adopted the girl during a work-related trip to the arid parts of Kenya. Being a mother, she couldn't imagine the girl dying. Speaking during an interview on Kameme TV she narrated,

"I have four kids, I adopted a child when I found some people dying because of hunger during a work-related project.

I thought of the food we throw in the dustbin and I couldn't let her die.I told God that I wanted to protect her and that she would never go hungry.

The area was a bad one she risked being sexually abused, we are now 10 plus years with her. She was still crawling at the time."

The mother of two says not everyone you work with is your friend.

"I started working with a local media house before being retrenched after two years.

Sometimes you find yourself working with people who are jealous of your progress. After 1 month Anne Ngugi called me as her assistant as she was pregnant at the time. She was fired after 2 weeks, after that I was given her position."

The presenter says losing her mum hit her hard as she was the only one who believed in her.

"I felt very low when my mum died. At the time I was living in Rongai, I used to say I could never die before building my mum a nice house. I had no one to believe in me, It was very hard for me to believe she had passed away." Keziah and her ex-husband Kiengei alongside theri daughter
Image: courtesy

Keziah has a daughter with her ex-husband Kiengei. She also has a child with her new husband.

Keziah Wa Kariuki and George Njoroge tied the knot in a colourful wedding at Our Lady of the Rosary Catholic Parish, Ridgeways, Nairobi, on December 22, 2021.

Keziah introduced her new man in early 2021 during her dowry payment ceremony.

The invites-only wedding was attended by a few family members and close friends. Betty Bayo and her husband Tash were among the bridal and groom's teams.

Trouble between the now ex-couple started after the Kiengei strayed out of his marriage. He was having an affair with his current wife Mugure while still married to Keziah.

Keziah is now a businesswoman selling hair and body oils.

"My dad used to live in every house for a week. He has never been biased against each other." - Keziah, ex-wife to Mzee Kiengei
Entertainment
2 weeks ago

Photos: Kiengei and ex-wife Keziah reunite after her wedding

After hugging the daughter, Kiengei proceeded to hug his ex-wife Keziah and fans were left screaming as they clapped for the ex-couple.
Entertainment
1 month ago

Most of these baby mama cases have been presented in court with some going back to 2018.
Politics
1 month ago

Kameme presenter Keziah Wa Kariuki has finally walked down the isle with her new man identified as George. Keziah found new love after separating ...
Entertainment
6 months ago
WATCH: For the latest videos on entertainment stories