I miss you Harmonize-Kajala lovingly says

• Kajala and Harmonize have been on fire since they made up a few weeks ago.

• Harmonize says that Kajala is the person giving him the motivation to improve as a musician. 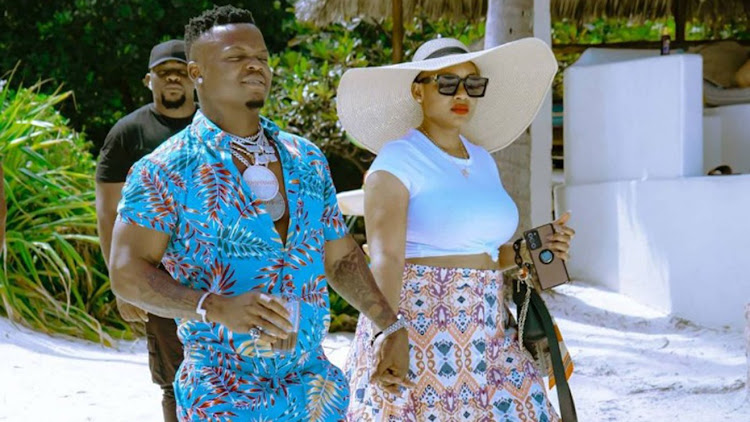 Harmonize and Kajala in the past
Image: Courtesy

It is clear that Harmonize and Kajala's love affair has continued to grow every day after the two reunited several weeks ago.

For almost a year there was a strained relationship between the two artists following their separation in April last year.

The situation however changed a few weeks ago after Kajala accepted Harmonize's apology. The Kondegang boss is currently on a musical tour in Goma, Congo and Kajala hasn't been able to cope with the loneliness at home.

The actress has used her Instagram page to confirm her love for Harmonize and tell her how she finds him. "I miss you @ harmonize_tz💉😣❤," Kajala said on her social media.

The message came just hours after Harmonize made a video for his girlfriend. In the video, Harmonize showed the great love he received in Congo and said he was there to make Kajala proud.

"I want you to know that I am here and I love you very much. I know you are far away but I have nothing to do because I know you are preparing for our big day. I am proud of you and I am here to make you proud," he said.

The musician also used the video to thank his girlfriend for giving him the motivation to push his music career. "I'm here to make you proud. This is just the beginning of counting blessings," he said.

In his History, Harmonize revealed that he is always happy when he gets a chance to win with his girlfriend at home.

It is clear that the two have already begun living together again. Kajala is now not only a Harmonize fan but also her manager.