Guardian Angel: We did not get married to have kids

• Esther Musila has kids from her previous marriage.

• Esther Musila and Guardian Angel have been criticized river their big age difference, the lady is in her 50's while the artiste is in his 30's. 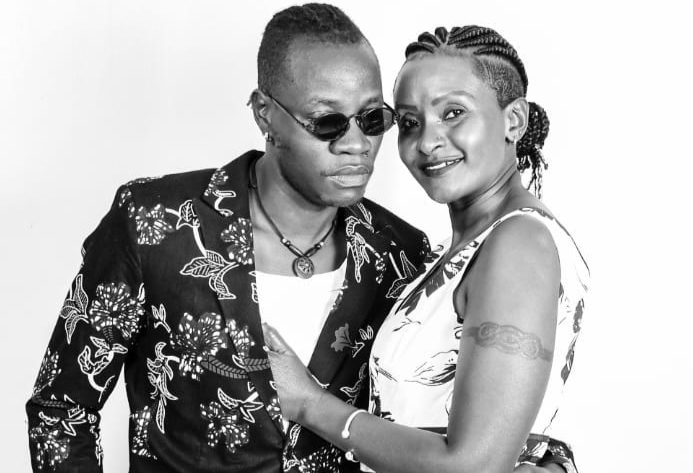 Guardian Angel and his wife Esther Musila have said their marriage would remain strong whether they get kids or not.

The 'Nadeka' hitmaker says kids are just an addition to the family.

"Kids are God-given." He started speaking during an interview with Plug TV, adding, "If I would have married a younger lady who is younger than me and find out she cannot bear kids. Would I send her away? When I was coming into our marriage the priority is my marriage, kids were number 2.

If kids come,  sawa if not we are okay with it It would not reduce how I feel towards Esther."

"If we were to get kids the baby would be ours, so why is society bothered?"

Guardian says before he got married he wasn't as happy as people assumed he was.

"I had never been happy until I met my wife. I treat her good because she is part of me. Once in a while, we disagree but it does not stay for long. When am wrong I apologize fast but back in the day I could never say sorry? Sometimes I apologize even when she is in the wrong so that we just maintain peace."

"He is such a vibe and is always happy."

In conclusion, he says,

"There are so many things I have adjusted to because of how I fell towards my life. How we live our lives in the house is how we live outside.

If your partner does not like some things, adjusting it won't kill you. She also understands there are boundaries. I do not use my male machismo in the relationship."

Esther says friendship is the strongest foundation in a relationship.

"We are friends with him I can tell him anything and we laugh about it, he does not judge me."

Esther Musila's heartwarming message to cute son as he turns 24

Guardian Angel posted a video of a newborn baby and some fans came trolling him.
Entertainment
1 month ago

Mama Mobetto says she sees no problem in getting married to a yiounger man.
Entertainment
1 month ago

Guardian Angel celebrated wife saying she is the best thing that has ever happened in his life.
Entertainment
1 month ago
WATCH: For the latest videos on entertainment stories